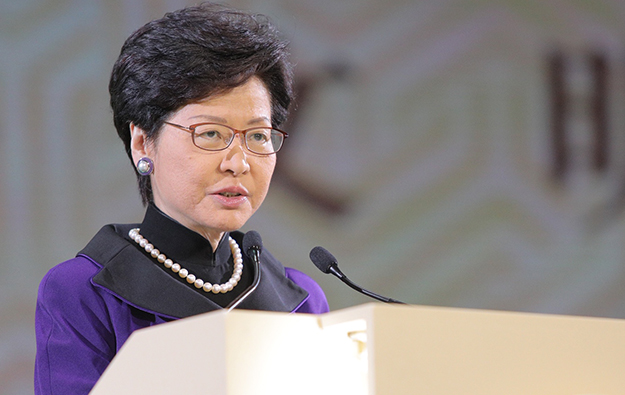 Hong Kong’s recent growing number of Omicron-variant Covid-19 cases has in likelihood set back the chances of that city having a quarantine-free travel arrangement with mainland China, said Hong Kong Chief Executive Carrie Lam Cheng Yuet-ngor (pictured in a file photo), in comments to local media, prior to the city’s Executive Council meeting, on Tuesday morning.

“We will have to wait for a while before we could put in place this… resumption of normal travel between Hong Kong and the mainland,” stated Hong Kong’s leader.

Before Christmas, a senior Macau official reiterated that Macau and Hong Kong might be able to create conditions – via steps including high vaccination rates – for quarantine-free travel, once Hong Kong and the mainland had reached a similar arrangement.

Macau’s neighbouring Special Administrative Region was said by a number of investment analysts to have contributed at least 15 percent of Macau’s annual casino gross gaming revenue (GGR) in pre-pandemic times.

As of Monday, Hong Kong had recorded an aggregate of 102 Omicron infections, Ms Lam noted in her Tuesday remarks. Of those, 97 were classified as ‘imported’, and the other five as ‘epidemiologically linked’ to imported cases.

The source within Hong Kong of 102 confirmed Omicron infections had been clarified, reported several Hong Kong media outlets, citing Ms Lam. Shortly after she had spoken, Hong Kong officials announced that the city had recorded its first unknown-origin Covid-19 case for three months.

The number of established cases linked to diners at a restaurant called Moon Palace in Hong Kong’s Kowloon Tong district, had gone up, according to local health authorities in Tuesday commentary. A Cathay Pacific Airways Ltd flight crew member had reportedly eaten there with some companions on December 27, before being diagnosed with Omicron infection.

On Tuesday Ms Lam said the coming two weeks would be “key” for the authorities to identify and “cut off” any transmission links to the Omicron outbreak.

Currently, mainland China remains the only place that has a largely quarantine-free travel arrangement with Macau.

The imminent return of package tours from mainland China will not only help boost Macau’s tourism businesses, but is also expected to help casinos gain more foot traffic in their mass gaming... END_OF_DOCUMENT_TOKEN_TO_BE_REPLACED