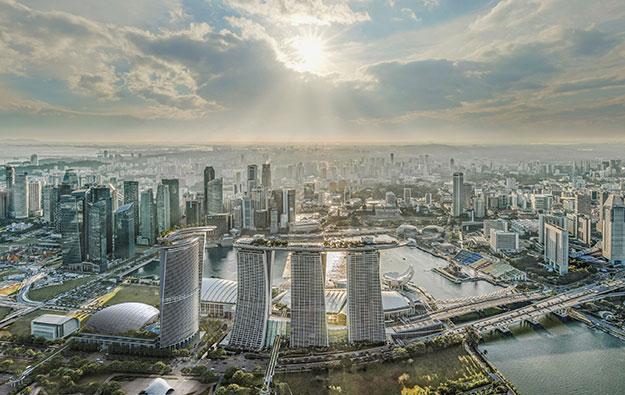 A country report on Singapore from the International Monetary Fund (IMF), issued on Thursday, praises the city-state’s public-policy approach to the Covid-19 pandemic.

The document was published a day after Marina Bay Sands (pictured, foreground) - one of Singapore’s two casino resorts – reported second-quarter results that beat market expectations. In other developments, an investment analyst upped by almost 80 percent his full-year 2022 earnings estimate for the other gaming complex, Resorts World Sentosa.

The document added: “The high vaccination rate and lifting of domestic and border restrictions since end-March 2022 are also expected to support the recovery in consumer-facing, air transport, construction, and tourism-related sectors, though activities in most of these sectors may not return to pre-pandemic levels by end-2022.”

Analyst Samuel Yin Shao Yang stated: “These results are significant as they reflect operations after Singapore reopened its borders on 1 April 2022 and axed Covid-19 testing requirements on 26 April 2022.”

Robert Goldstein, chairman and chief executive of Las Vegas Sands, said on Wednesday in a conference call with investment analysts that Marina Bay Sands was recording growth in both the base mass and premium mass gaming segments. He added that the firm expected business activity to benefit from an increase in air traffic to Singapore, as current traffic levels were still at just around half of those recorded prior to the Covid-19 pandemic.

Second-quarter VIP “volume” – another measure of casino business – had recovered to about 75 percent of the pre-pandemic level at the property, stated Maybank.

This was “largely due to the return of Malaysian and Indonesian gamblers,” added the bank.

Regarding Marina Bay Sands’ latest reporting numbers, Maybank said: “Though a quarter earlier than we expected,” the figures were “broadly in line” with its expectation that industry VIP volume and mass market GGR would “recover to 75 percent and 85 percent of 2019 levels in the long term”.

It added: “Las Vegas Sands stated that gaming operations will not return to 100 percent of 2019 levels until China relaxes its zero-Covid policy.”

The bank said it interpreted Marina Bay Sands’ second quarter results as “positive” for Resorts World Sentosa – the other half of the city-state’s casino duopoly – run by Genting Singapore Ltd. “Operations recovered faster than expected even without Chinese gamblers,” according to Maybank.

It added: “We lift full-year 2022 estimated earnings for Genting Singapore by 78 percent.”

In Macau – where Las Vegas Sands has casino operations via its Sands China Ltd unit – market recovery has been stifled by periodic outbreaks of Covid-19 occurring on the mainland and in Macau.

China’s government is currently advising its citizens against non-essential travel beyond its boundaries. There have also been anecdotal reports in the media that exit visa requests are taking longer to assess than in pre-pandemic times.

John DeCree, an analyst at CBRE Securities LLC, suggested in a Thursday note that gaming revenue at Marina Bay Sands would “ultimately exceed 2019 levels likely in 2023, similar to trends seen at U.S. casinos.”

He added: “The cash flow and value of Marina Bay Sands remains a bedrock for the shares of Las Vegas Sands, providing substantial downside protection while leaving an attractive call option on a Macau recovery.”

The IMF team of experts assessing Singapore said in its Thursday report it expected 3.7-percent GDP growth for 2022, although headline inflation – influenced by geopolitical factors globally – was “expected to remain elevated at about 4.8 percent in 2022.”

Macau casino operator MGM China Holdings Ltd had a “record” market share in January, and its venues were the “highest-earning businesses” in the portfolio of the majority owner MGM Resorts... END_OF_DOCUMENT_TOKEN_TO_BE_REPLACED