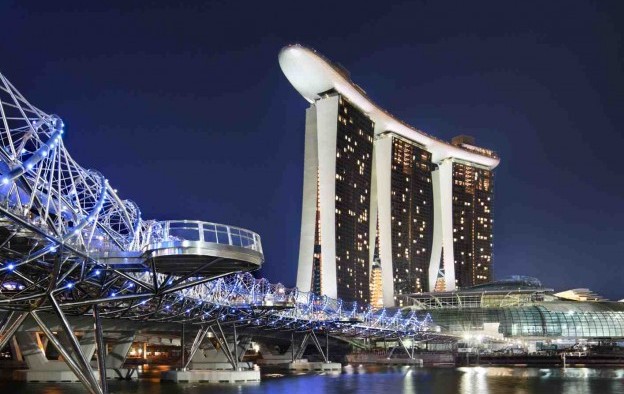 The city-state has been reopening in stages its inbound tourism market, which had been severely curtailed during the Covid-19 pandemic.

Second-quarter casino revenue at Marina Bay Sands rose 124.2 percent year-on-year, to US$500 million. Rolling chip volume for VIP play increased 781.4 percent to just over US$5.39 billion. Mass-market chip drop was just under US$1.14 billion, up 105.6 percent.

The resort’s parent, Las Vegas Sands Corp, said in its Wednesday announcement that at the group’s Macau portfolio of resorts, run by the Sands China Ltd unit, net revenues fell 56.3 percent year-on-year, to US$374 million.

The market there has been affected by on-off restrictions on inbound tourism amid Covid-19 alerts in China. By Friday, Macau will have had a nearly two-week shutdown of non-essential businesses, including casinos, due to an ongoing citywide outbreak of Covid-19.

Under U.S. generally-accepted accounting principles, Sands China’s second-quarter net loss was US$422 million, compared to a net loss amounting to US$166 million in the same quarter a year earlier.

Second-quarter 2022 adjusted property EBITDA in Macau were negative by US$110 million, versus positive EBITDA of US$132 million in the same quarter in 2021.

Andrew Lee, an analyst at Jefferies Hong Kong Ltd, said in a Wednesday note regarding Sands China: “Amongst the property portfolio, only The Plaza reported positive EBITDA of US$17 million, with The Venetian returning to EBITDA loss (negative US$21 million) and The Londoner’s negative US$54 million being the largest quarterly EBITDA loss amongst the properties.”

Despite the improvement in Singapore, the parent group’s second-quarter net loss widened to US$290 million, from US$192 million in the second quarter of last year.

“While pandemic-related restrictions continued to impact our financial results this quarter, we were pleased to see the recovery in Singapore accelerate during the quarter,” said Robert Goldstein, Las Vegas Sands’ chairman and chief executive, as cited in a press release issued with the results.

“The recovery seen in Singapore is a good indication of Asia gaming demand and the crossover into Macau is clear once borders reopen with [mainland] China,” said a Thursday note from brokerage Sanford C. Bernstein Ltd, referring to currently tighter travel rules between Macau and neighbouring Guangdong province, the main tourist entry point to Macau.

Las Vegas Sands said in its earnings presentation that the target date for completion of a US$3.3 billion expansion of Marina Bay Sands – previously agreed with the Singapore Tourism Board – was still 2026, as mentioned in a January 26 presentation. In April the parent had said it was able to delay until 2023 the start of extenson work, though it is also engaged in a US$1-billion revamp of its current hotel space.

The group’s net debt as of June 30 was recorded as just under US$8.89 billion. That reflected the inclusion on the balance sheet of a US$1.0 billion inter-company term loan from Las Vegas Sands to Sands China, funded on July 11, 2022, and repayable on July 11, 2028. The group’s cash and cash equivalents were just under US$6.47 billion.

Sands China had “total available liquidity of US$2.8 billion – including US$1.0 billion available from the revolver and US$1 billion shareholder loan from its parent company Las Vegas Sands,” noted analysts DS Kim and Livy Lyu of JP Morgan Securities (Asia Pacific) Ltd in a Thursday note.

“This should give Sands [China] ample liquidity to withstand even [a] zero-revenue environment for 16 months,” up to October 2023, they added.