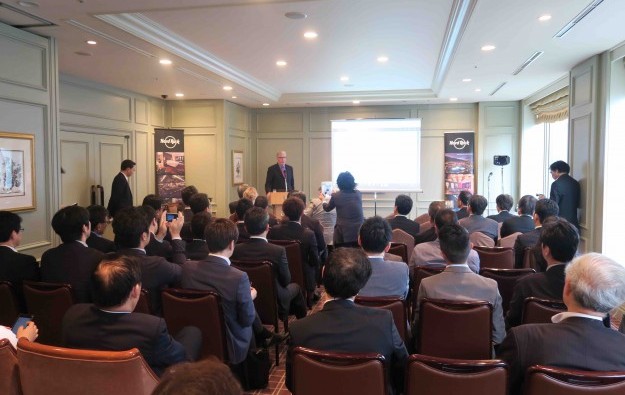 A process for selecting casino resort projects in Japan – as proposed recently by advisers to the national government – indicates the advisers’ lack of gaming industry experience and is likely to mean casino operators are in effect channelled into choosing only the largest cities in that country for a scheme, says a casino executive.

Daniel Cheng – senior vice president for business development (casinos) for Asia at Hard Rock Hotel and Casino – made a presentation at a Tokyo discussion session hosted by an organisation called the Japan Tourism Research Association. Attendees at the event were said to be mostly executives from Japanese companies interested in being equity partners for a so-called integrated resort (IR) scheme in Japan.

Edward Tracy, chief executive of Hard Rock International’s Japan division, also spoke at the event, highlighting the group’s current presence in the entertainment sector in Japan, and suggesting it was best positioned – among the likely bidders – to link with local partners for a Japan gaming licence.

His colleague Mr Cheng’s presentation was more forthright. It said that – due to Japan’s mooted request for proposal (RFP) process not currently defining the number of licences available, and an absence of guidance on where such resorts should be located – some casino operators might win a bid in more than one location, and be forced to “sacrifice” the “lesser location”. A “lesser location may only attract one or even no bids,” added the paper.

The document stated additionally that a concept proposed by advisers to the national government – of a joint local government-private sector bid for a casino resort – was “unprecedented” in the commercial gaming industry sector. Mr Cheng said government entities had social responsibilities that did not necessarily align with private sector investors’ aim of optimising returns on invested capital.

Mr Cheng’s paper also noted that the fact each pairing of local government partner and operator would then need to be referred to Japan’s national government for consideration, was “tantamount to a two-stage bidding by operators, which is again, unprecedented”.

The paper suggested the industry’s preference was for an alternative approach: “separation of the political and commercial process; a single standard applied in the bid process; clear articulation of the meaning of an integrated resort licence; and an RFP conducted only for selected locations”.

Mr Cheng also suggested that Japan’s national government could conduct a pre-qualification process to shortlist casino operators that would be allowed to bid for a licence. He added that the national government could also outline the bidding consortium structure rules, namely by stipulating minimum and maximum equity ratios between foreign and Japanese companies, as well as the number of casino operators allowed in a single consortium.

Unlike in the United States, where the American Gaming Association has provided a powerful and generally united lobby for the casino industry in discussions with government, there is no Japan-wide association to cover all casino operators interested in the market, and authorised to speak publicly with a single voice on such issues, said Jane Tsai, who also spoke at the Japan Tourism Research Association event. She is a former executive at Macau casino operator Galaxy Entertainment Group Ltd, and is now chief executive of casino industry consultancy firm JCT Holdings.

At the event, she gave a presentation titled “Japan’s IR vision: who is the primary customer?”

Ms Tsai stated that “easily 80 percent plus” of the visitors to a Japanese casino resort or resorts would be “domestic Japanese tourists”.

That runs contrary to views expressed by some Japanese lawmakers. They have suggested the new industry would be a way for Japan to attract a greater number of tourists from overseas and to boost national gross domestic product, rather than as a way to redistribute between fellow Japanese the gaming taxation levied on players, and the spending on non-gaming items.

She also stated: “In order for Japan’s integrated resorts to be successful, it is imperative that the Japanese central government engages experts with tangible IR and gaming operating experience, not just those that have studied integrated resorts from afar.”

Nonetheless, Ms Tsai suggested Japan had a “unique opportunity” to set a new industry standard via “eSports and skill-based gaming technology which Japan has great capacity to develop,” rather than merely replicating the products and business models for casinos found in places such as Las Vegas and Singapore.

She indicated however there had to be a “commercially smart framework” in place for a Japanese industry to work well.

An April white paper issued by business consultancy Global Market Advisors LLC had suggested that an “Osaka Strip” concept should be considered, for a world-class casino gaming hub in Japan with multiple venues, to compete with the likes of Las Vegas and Macau. One of the sponsors of the discussion paper was Hard Rock International Inc.

Under a best-case scenario, the IR Implementation Bill might be passed by the country’s parliament in the 2017 extraordinary session in the autumn, suggested a note in May from banking group Morgan Stanley.