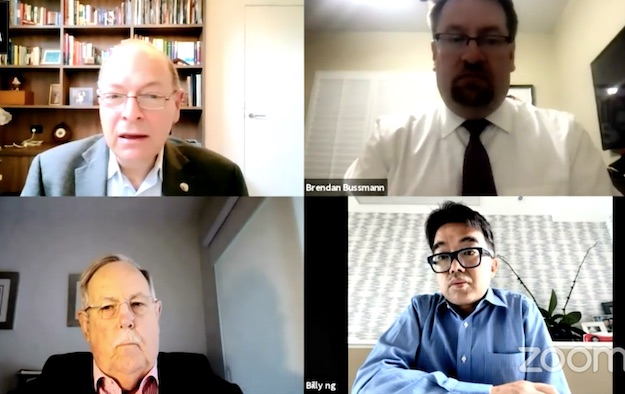 Japan was likely to remain a major opportunity for investment by international casino firms, though the eventual level of return on capital investment was subject to many variables. So heard a Thursday panel session (pictured) of the Japan IR Forum, an online conference about the casino industry in that country. Such gaming venues with tourism facilities are known in Japan as integrated resorts, or IRs.

The panel was moderated by Peter Cohen, director of regulatory affairs at The Agenda Group, and a former state regulator in Australia for gaming.

The panellists agreed Japan should press ahead with its casino resort liberalisation, notwithstanding the pandemic. It would “help Japan rebound”, suggested Mr Bussmann.

Up to three IRs will be permitted across the country at this stage, although it could be near the end of the current decade before any open.

Japan could evolve as a “US$10 billion or US$20 billion” casino gaming market at some point, thanks the size of its internal market and proximity to other Asian countries, said Bank of America Merrill Lynch’s Mr Ng. But he also noted there were “a lot of questions” from investors on the prospect of success for Japan IRs, and regarding the Japanese government’s approach.

Mr Ng stated: “The problem is less about Covid[-19]: even before… there were a lot of doubts on the returns profile.”

This was “because of the regulations, the potential framework… if you need to commit to… a US$10-billion project, you do need to see that it can create a reasonable return in a reasonable time frame.”

Mr Bussmann said Japan “has been and will continue to be, one of the crown jewels” of the gaming market worldwide, despite the impact of the Covid-19 pandemic on global travel.

“There are… operators that stay sidelined at this point; but some time later they may get back” to revisiting the opportunities Japan’s IR development presented, said Mr Bussmann.

He noted Las Vegas Sands Corp, parent of Macau operator Sands China Ltd, and also parent of the promoter of Marina Bay Sands in Singapore, had mentioned a focus on investment in Asia. The commentary followed its announcement of a disposal of Las Vegas, Nevada venues and operations in the United States.

The panellists also discussed whether cashless gaming would gain traction in Asian land-based gaming markets, including Japan. The Covid-19 pandemic had made touchless devices more prevalent and readily accepted by the public.

But Bank of American Merrill Lynch’s Mr Ng pointed out challenges to the adoption of cashless gaming in Asia, given the infrastructure required, and the question of whether gaming patrons on that continent were “mentally” ready to accept it.