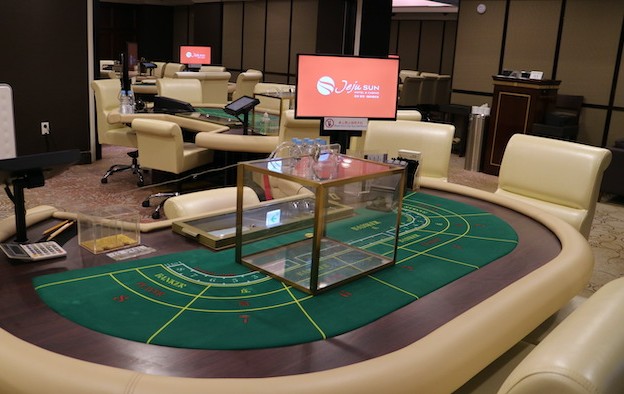 Management at Jeju Sun Hotel and Casino, a complex with a foreigner-only gaming venue on the South Korean holiday island Jeju, is confident of post-pandemic business recovery with support from its parent, Philippines-listed Bloomberry Resorts Corp.

That could include bringing customers to Jeju from the Philippines, where Bloomberry Resorts operates Solaire Resort and Casino, in the capital Manila, as well as using the marketing experience of the Philippine parent, said respectively the gaming director at Jeju Sun, and that venue’s chief executive.

Jeju Sun resumed its hotel and casino operation on October 3, in line with a request from the local government made to the whole casino industry on the semi-autonomous island.

Lee Seongyeol, CEO of Jeju Sun Hotel and Casino, told GGRAsia in an interview held on site at the property: “As the duration of the Covid-19 pandemic era was unpredictable, it was hard to set up a post-pandemic strategy.”

Nonetheless, Mr Lee outlined what he said was some of his property’s advantages in the Jeju market.

“Our headquarters, Bloomberry Resorts, owns Solaire Resort and Casino in Entertainment City Manila…. Therefore, we could harness,” that “marketing capacity, and customer service know-how as well”.

He added, regarding the Jeju operation: “We also own our hotel,” which he said was not the case for some of the other operators of foreigner-only casinos on the island.

Regarding the scope for fresh business ties between Jeju Sun and the parent, Jeju Sun’s gaming director Amiel Meneses told GGRAsia: “We might map out, for example, promoting to Solaire’s VIP and mass players, an invitation to Jeju Sun”.

Jeju Sun CEO Mr Lee noted: “For the prosperity of our business, an increase in the number of international direct flights to Jeju is critical”. According to South Korea’s Ministry of Land, Infrastructure and Transport, in an announcement on October 30, a total of 41 direct international round-trip air services per week to Jeju from places in the East Asia region, have been scheduled between October 30 and March 25 next year.

According to ministry data reviewed by GGRAsia, that is still only a fraction of the total number of international round-trip passenger air services per week linking to Jeju in the pre-pandemic trading year of 2019.

CEO Mr Lee said the South Korean authorities could help the local industry – 16 of the country’s 17 casinos are for foreign players only – by allowing advertising at foreign-visitor arrival points.

“We want casinos off the list” that “prohibits casino adverts in public, including at airports,” he told GGRAsia. Such “deregulation” would help “casino sales and marketing activities”, he added. The relevant restrictions are covered by two separate pieces of South Korean legislation.

Regarding Jeju potentially competing with Macau for foreign players – the latter has said it wants to rely less on mainland China players in future and bring in more clients from overseas – Mr Meneses noted; “As the Macau casino industry is a totally different ‘world’ from Jeju casinos, it is hard to compare at the moment.”

Though he added if a Japan integrated resort (IR) industry were to start operations, then Jeju Sun as a Jeju operator, would expect “synergy” rather than zero-sum competition, due to the “proximity” of the Japan market. One Japanese community in contention for an IR – Nagasaki – is only “300 kilometres [186 miles] away from Jeju”, said Mr Meneses.

An ongoing lobbying effort within the Jeju casino industry is to get permission to offer “proxy betting” to foreign players not physically present in a local casino. A bill on proxy betting bill is currently with the National Assembly, Mr Meneses noted. He added: “We are possessing proxy betting experience” via the Solaire operation of the parent in Manila. “That is another advantage for us,” relative to other South Korean casinos, said the executive.

The decision by the Macau government to grant fresh 10-year licences to each of the city’s six incumbent casino operators has been welcome by top management at those firms. Each of the concessions... END_OF_DOCUMENT_TOKEN_TO_BE_REPLACED