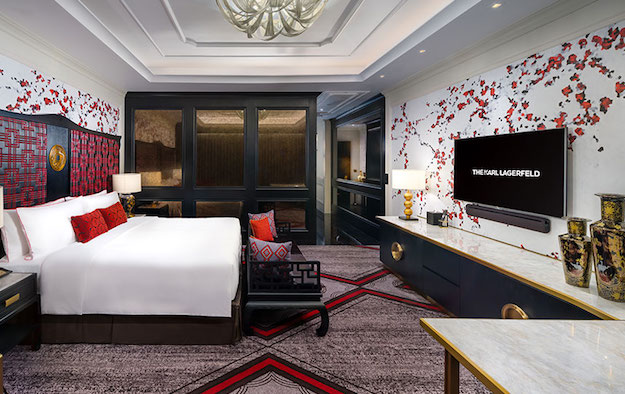 The Karl Lagerfeld Hotel (pictured), a high-end accommodation tower at the Grand Lisboa Palace casino resort, is scheduled to open to the public in December, according to an announcement on social media by its promoter. The new hotel is accepting bookings from December 3, according to the property’s website.

Grand Lisboa Palace will become home to the first hotel ever designed by the late Mr Lagerfeld, one of the most recognised designers in the world, who had worked as a couturier for fashion brands including Chanel and Fendi. He died in February 2019 in Paris, France.

SJM Holdings had previously mentioned that the Karl Lagerfeld Hotel would have up to 270 guest rooms and suites in a “20-storey tower”.

This is the first time that Mr Lagerfeld and his team designed an entire hotel. Among its features will be an enormous sculpture of Mr Lagerfeld’s pet cat ‘Choupette’ at the lobby, while Mr Lagerfeld’s own silhouette graces the room keys, according to a previous report from media outlet Tatler Asia.

When fully operational, the property is to feature a total of 1,892 rooms and suites in three hotel towers, including a Grand Lisboa Palace Macau hotel, the Karl Lagerfeld Hotel, and a “Palazzo Versace”-branded hotel.

Brokerage JP Morgan Securities (Asia Pacific) Ltd said in a note earlier this month that SJM Holdings would open “the Karl Lagerfeld Hotel (partially) with some retail shops in the fourth quarter” this year. That would be “followed by three VIP rooms and the [Palazzo] Versace hotel in first quarter 2022, and the rest of retail/food and beverage/hotels throughout 2022,” it added.

It is likely that Macau will shortly have a third round of citywide centre-based Covid-19 testing in little more than a week, after the results so far of a second mass test – that was due to finish... END_OF_DOCUMENT_TOKEN_TO_BE_REPLACED