Konami gaming segment back to profit in quarter to June 30 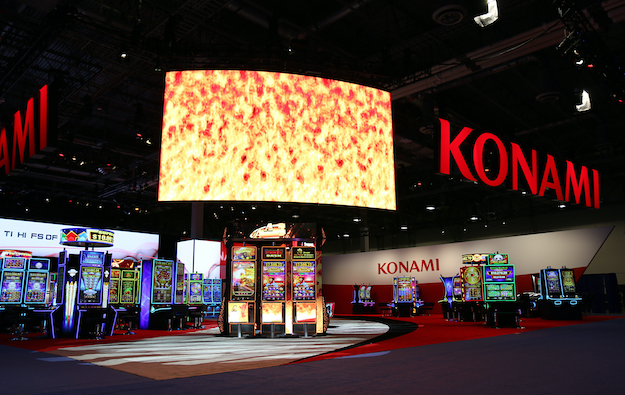 Konami Holdings Corp reported on Thursday it had swung back to a segmental profit for its gaming and systems division – including casino equipment – in the three months to June 30. Such profit was JPY916 million (US$8.4 million) compared to a loss of JPY925 million in the prior-year quarter.

The performance was on segmental revenue that jumped 111.5 percent, to nearly JPY6.30 billion, from JPY2.98 billion in the same quarter of 2020.

Konami Holdings said the quarterly improvement in the segment was aided by “the vaccine rollout in North America,” which had meant that “some restrictions, including entrance restriction on casino facilities, were relaxed,” resulting in the market “revitalising”.

During the reporting period, the division “expanded” its slot machine offer, via the Dimension 49J, featuring a ‘J-curve’ display, a product Konami said was dedicated to the “revenue share business” in the slot segment.

The company also said it had installed its casino management system Synkros “at multiple casino facilities” during the reporting period. “Further contribution expected from multiple deals in the second quarter,” said the firm, including the installment of its system at the Resorts World Las Vegas casino complex, which opened on June 24.

Group-wide profit for the three months to June 30 jumped to nearly JPY13.66 billion, from JPY4.19 billion.

Such increase was aided by a 25.2 percent year-on-year rise in business profit in the digital entertainment division, to JPY19.16 billion, from JPY15.31 billion in the prior-year quarter.

Konami confirmed a JPY22.50 cash dividend as payable in the quarter to September 30, relating to financial year ending March 31.

A Macau court was told on Wednesday that Asian American Entertainment Corp Ltd (AAEC), led by Taiwan businessman Marshall Hao Shi-sheng, was to blame for its failed tie-up with United States-based... END_OF_DOCUMENT_TOKEN_TO_BE_REPLACED