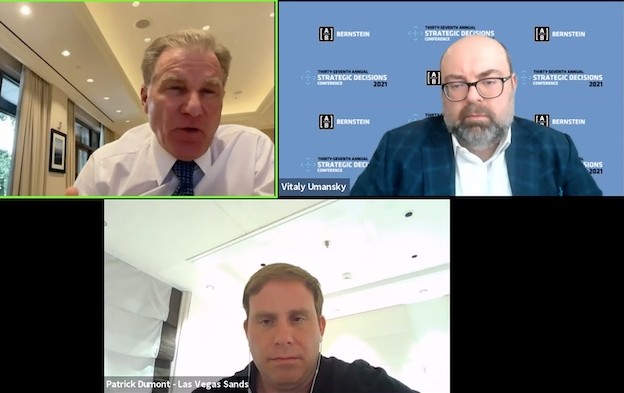 The chairman and chief executive of the parent firm of Macau casino operator Sands China Ltd said on Wednesday he was “disappointed” about the pace of recovery in the Macau gaming market, but understood the Macau and mainland China authorities had opted for a safety-first approach amid the Covid-19 pandemic.

Mr Goldstein stated regarding the pace of Macau’s rebound: “We are disappointed… we were hoping for a quicker recovery”. But the Las Vegas Sands executive added he understood that the authorities in Macau and the mainland were “very cautious” on travel easing, as they had a “zero-tolerance policy” toward Covid-19.

The executive added he had “no concerns about long-term demand” in Macau.

Commenting on the launch of the first phase of the Londoner Macao, the rebranded and revamped Cotai resort formerly known as Sands Cotai Central, Mr Dumont said that as demand in Macau “returns… our gearing will be better, to produce better cash flow, with a better mix of customers than we have ever had before, because of the quality of the Londoner… and the room product, and the amenities around it.”

Discussion on the conference call also turned to the Singapore market, where a unit of Las Vegas Sands runs the Marina Bay Sands casino resort, as one half of the city-state’s casino duopoly.

Mr Goldstein was asked for his reaction to the strength of demand from the locals market there. Singapore citizens and permanent residents must pay a government levy for casino entry, either for 24-hour access or for year-long entry.

The CEO said he thought the recent “outsize” local demand would “dissipate” once people could travel more easily outside Singapore.

The executive added that the “table side” in Singapore was more driven by “foreign play”, implying local demand was mainly for slot machines and electronic table games.

Mr Dumont was asked whether the company had as a result of the pandemic made changes to planning details for its pledge to the Singapore government – announced in April 2019, at the time its gaming rights were extended until 2030 – to invest a further SGD4.5 billion (US$3.4 billion) in Marina Bay Sands.

Genting Singapore Ltd, promoter of the other Singapore casino resort, Resorts World Sentosa, said recently that its own SGD4.5-billion reinvestment plan was likely to require adjustments, to take account of factors including pandemic-related disruption to construction timetables and social distancing at planned amenities.

Mr Dumont noted: “There was still a lot of work we had to get through with the government, and because of the impact of the pandemic, we haven’t really had a chance to go through all of that.”

He added: “We’re looking forward to re-engaging and continuing our discussions.”

Asked about the decision to go for an outright US$6.25-billion sale of the Venetian Las Vegas and the Palazzo, in Las Vegas, Nevada, Mr Dumont noted it was about redeploying capital in a “high-growth area”.

Mr Goldstein stated the group was not exiting the U.S. market and mentioned, under questioning, that with regard to online gaming, it was “committed to being in that space… not just in the U.S,” but also possibly in either Canada, Europe or South America.

The Las Vegas Sands executive stressed he was “steadfast in my belief that China will not open up to legalised online gambling.”

The CEO added that while “not fashionable” in the gaming sector to seek expansion in land-based operations, he thought it would be “silly” not to be in potential new markets such as the U.S. state of Texas, where the returns could be “enormous”, and could lead to state-based opportunities in licensed online gambling.

He noted however that liberalisation there was likely to be several years down the road.

The imminent return of package tours from mainland China will not only help boost Macau’s tourism businesses, but is also expected to help casinos gain more foot traffic in their mass gaming... END_OF_DOCUMENT_TOKEN_TO_BE_REPLACED