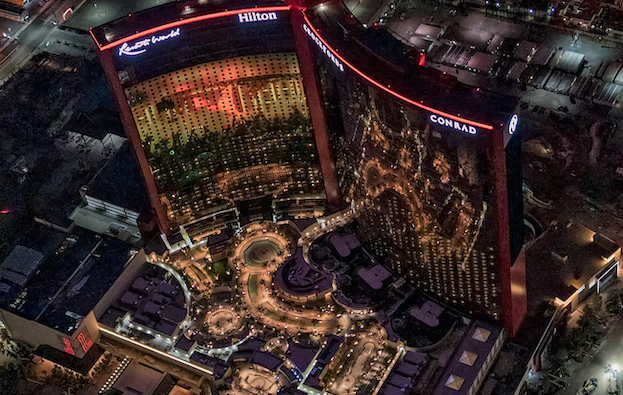 The soft opening on Thursday (June 24) of Resorts World Las Vegas in the Nevada, United States, casino hub, could point the way for the venue’s parent, Malaysia’s Genting Bhd, to seek a U.S. listing for its Genting Americas Inc unit, says a Thursday note from brokerage Sanford C. Bernstein Ltd.

“But a digital strategy may be needed” for such a listing, “which is currently lacking,” added analysts Vitaly Umansky, Kelsey Zhu, and Louis Li.

A number of Nevada-based casino firms with operations in Asia – including Las Vegas Sands Corp – are either currently interested in, or actively pursuing, digital strategies in the U.S., as that market opens up to online betting on a state-by-state basis.

Genting Bhd has global casino business, including in Singapore via Resorts World Sentosa, run by Genting Singapore Ltd; and in Malaysia, the United States, and the United Kingdom, via Genting Malaysia Bhd.

Sanford Bernstein observed that Genting had “one of the largest slot operations in the U.S.,” at its Resorts World Casino New York City property.

“With the opening of Resorts World Las Vegas and a strongly rebounding U.S. gaming industry, and if Genting’s history is any guide, a Genting Americas U.S. listing may be coming at some point in the future,” stated the Sanford Bernstein team.

It noted a formal opening of Resorts World Las Vegas – a US$4.3-billion property – was planned for July 4, Independence Day in the U.S.

The brokerage noted the “original plan” of the Genting group had been to open Resorts World Las Vegas “in 2016” with the property to be developed as an “Asian/Chinese thematic resort”.

The analysts observed that “due to a variety of events including the evolution of the Las Vegas customer, Resorts World was reconceived into a modern, premium-positioned, entertainment and food/beverage driven property”.

Sanford Bernstein said Resorts World Las Vegas should “compare well” with the top-five gaming properties in Las Vegas in terms of revenue and profit. “We see the competition as being largely Wynn, Venetian, Bellagio, Aria and The Cosmopolitan,” stated the analysts.

“Each of those properties generated in excess of US$350 million in EBITDA [earnings before interest, taxation, depreciation and amortisation] in 2019.”

Once business ramped up, “we would expect Resorts World to be able to generate EBITDA of US$250 million – conservative – to the high US$300s in millions,” added the brokerage.

Thursday’s note said that although Resorts World Las Vegas was at the northern end of the Las Vegas Strip, and therefore not likely to get as much foot traffic as the central Strip venues, the new property was near the newly-expanded Las Vegas Convention Center, and would be connected to it via a planned tunnel.

That, “coupled with the Hilton-branded hotels” at the property, and its “own 250,000 square feet [23,226 sq metres] of meeting space, helps position the property well in the MICE [meetings, incentives, conferences and exhibitions] space,” wrote the Sanford Bernstein team.

Andrew Lo Kai Bong (pictured), a senior executive at Hong Kong-listed casino investor Suncity Group Holdings Ltd, acquired controlling shares in the firm with effect from May 13, according to... END_OF_DOCUMENT_TOKEN_TO_BE_REPLACED