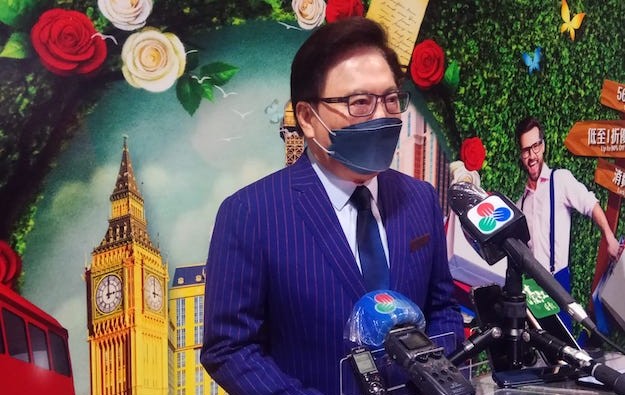 Macau casino operator Sands China Ltd is to have a “full opening” for Londoner Court, with its 300-plus accommodation units, in time for October Golden Week, said on Friday Wilfred Wong Ying Wai (pictured), the firm’s president and an executive director.

He was speaking on the sidelines of the launch of the three-day 2021 Sands Shopping Carnival, held at Cotai Expo at the Venetian Macao Resort.

The holiday surrounding China’s National Day on October 1, known as either ‘Autumn Golden Week’, or ‘October Golden Week,’ has in pre-pandemic times been a peak period for tourism to Macau, and for casino revenue there.

Mr Wong said an autumn launch schedule for Londoner Court was based on the possibility that at that date, mainland China would still be the only place with a quarantine-free travel bubble with Macau.

The executive reiterated that the rest of the Londoner Macao, including the exteriors – such as the scale replica of the Palace of Westminster’s Elizabeth Tower, known popularly as ‘Big Ben’ –  would be completed in coming months.

Mr Wong further stated that with a 6,000–seat arena to be completed at the resort in the first quarter of next year, “everything at the Londoner” would be completed.

The casino executive additionally noted that visitor numbers, hotel occupancy and gaming business had picked up since July 10. It coincided with the time when the Macau government had relaxed for inbound tourists from the mainland travelling via Guangdong,  the validity period of a ‘negative’ test for Covid-19, to seven days, from the previous 48-hour validity. Other parts of mainland China had continued to have seven-day validity for their tests.

In terms of “hotel accommodation, retail, and gaming, especially the mass segment,” Sands China had seen a “rebound very quickly” following the easing of the virus test validity period for those inbound via Guangdong.

This was likely to be reflected in robust trading for the remainder of July and for August, he added.

Mr Wong also expected second-half business to improve ‘much more’ than the pickup seen in the first half, with more events booked at the company’s properties.

On Wednesday, Sands China reported its first year-on-year rise in quarterly revenue since the second quarter of 2019, prior to the Covid-19 pandemic.

During the earnings call of Sands China’s parent, United States-based Las Vegas Sands Corp, Mr Wong said the Macau government had yet to indicate to the group whether the authorities might opt to extend slightly the six current Macau gaming concessions, as permitted under the current gaming law framework.

The current licences expire in June, 2022.

The imminent return of package tours from mainland China will not only help boost Macau’s tourism businesses, but is also expected to help casinos gain more foot traffic in their mass gaming... END_OF_DOCUMENT_TOKEN_TO_BE_REPLACED