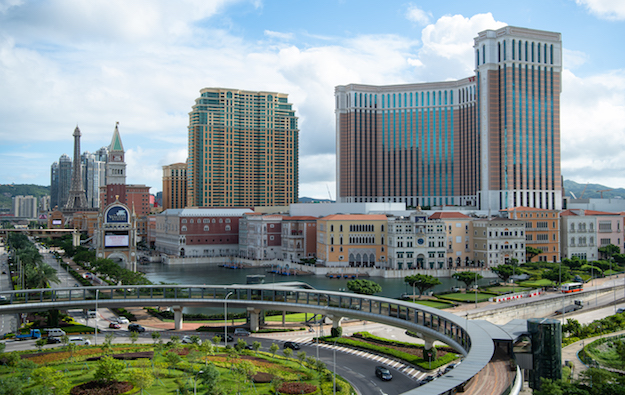 Such net revenue for the local unit Sands China Ltd was US$258 million, compared to US$374 million in the second quarter, said the parent in a Wednesday filing in the United States. Judged year-on-year, Sands China’s third-quarter net revenues were down 58.1 percent.

But third-quarter net revenues at the parent’s Marina Bay Sands casino resort in Singapore rose 203.6 percent year-on-year, and 11.3 percent quarter-on-quarter, coinciding with that market’s emergence from Covid-19 restrictions, and improvement in tourism volume.

Singapore adjusted property earnings before interest, taxation, depreciation and amortisation (EBITDA) rose dramatically in year-on-year terms, to US$343 million from only US$15 million; and rose 7.5 percent sequentially from the second quarter’s US$319 million.

Casino revenue at Marina Bay Sands stood at US$510 million for the three months to September 30, up 2.0 percent from the preceding quarter.

Las Vegas Sands said that at The Venetian Macao (pictured), Sands China’s first Cotai property, casino revenue fell 69.5 percent year-on-year, to US$60 million. Judged quarter-on-quarter, it was down 34.1 percent on the second quarter’s US$91 million.

“While travel restrictions continued to impact our financial results this quarter, we were pleased to see further progress in Singapore’s recovery,” said Rob Goldstein, the group’s chairman and chief executive, in prepared remarks in an accompanying press release.

The decision by the Macau government to grant fresh 10-year licences to each of the city’s six incumbent casino operators has been welcome by top management at those firms. Each of the concessions... END_OF_DOCUMENT_TOKEN_TO_BE_REPLACED