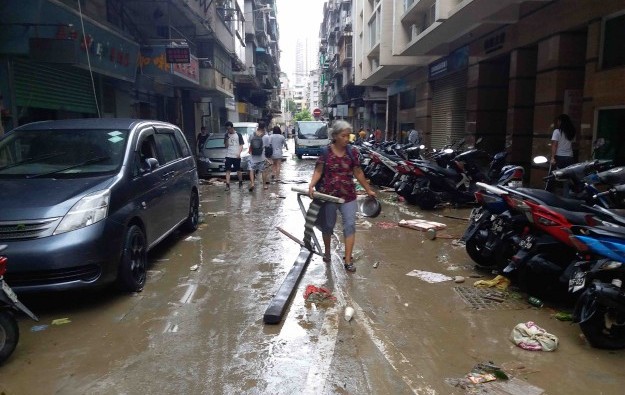 Cash donations totalling MOP215 million (US$26.7 million) had been pledged by Macau casino companies as of Friday for relief efforts to deal with the effect of Typhoon Hato, in addition to the firms mobilising staff to work as volunteers in community clean up.

U.S.-based Wynn Resorts Ltd, the parent company of Wynn Macau Ltd, on Friday announced a MOP30-million donation to assist families and local businesses in Macau recover from the typhoon.

The company said in a press release it would continue its community volunteer efforts in Macau, “in which hundreds of Wynn employees distributed water and supplies to the community, and now continue with cleaning up and helping to rebuild affected neighbourhoods”.

Sands China Ltd on Thursday had announced a MOP65-million donation – MOP30 million from Sands China and a MOP35-million contribution from the Adelson Family Foundation – to “assist with longer term relief, recovery and rebuilding efforts in Macau”.

The foundation is an organisation linked to the family of Sheldon Adelson, the founder of Sands China’s parent, U.S.-based Las Vegas Sands Corp.

“For children who tragically lost their parents to Typhoon Hato, Sands China has pledged to set up a fund to support their continuing education,” said Sands China in its press statement.

Typhoon Hato, an unusually fierce storm – the strongest recorded in Macau in 53 years – hit the city on August 23, leading to 10 fatalities, wide scale damage and flooding in the Inner Harbour district on Macau peninsula. It also caused some structural damage and some operational disruption to some of the city’s casino resorts.

A Macau government spokesman noted at a press conference this week following the disaster that the government had no involvement or oversight regarding relief money donated for the benefit of the local community by the city’s casino firms.

Under U.S. law – specifically the Foreign Corrupt Practices Act – it is illegal for companies doing business in an overseas jurisdiction to donate or give money to the local government. Three of Macau’s six licensed casino operators – Sands China, MGM China Holdings Ltd and Wynn Macau – have parent companies listed on U.S. exchanges, while a fourth – Melco Resorts and Entertainment Ltd – has a listing there.

Following Typhoon Hato, Melco Resorts was the first of the Macau operators to announce a donation for relief efforts and company volunteers to help the community clean up effort. It pledged on August 25 a MOP30-million “cash relief fund to support employees, the community and the restoration efforts”. The firm said the cash included a personal donation from company chairman Lawrence Ho Yau Lung.

On August 26, MGM China – its parent MGM Resorts International and a major shareholder, Pansy Ho Chiu King – announced they were contributing MOP30 million to “rebuild the Macau community” in the wake of the disaster.

On August 27, Lui Che Woo, chairman of Galaxy Entertainment Group Ltd, said in an open letter to the community and company employees that an aggregate of MOP60 million was being committed from the company’s foundation and his family “to support the relief efforts of the people of Macau as well as … [company employees] during this challenging and stressful period”.

On August 28, SJM Holdings Ltd said it would provide free medical treatment to “the needy” via a local medical centre. The offer started on August 30 and will be available for one month. The firm stated it was also opening its staff supermarket to locals “to help ease residents’ burden of shopping for necessities during this challenging typhoon period”.

All six Macau operators face potentially having to rebid for Macau casino rights when their current concessions expire on various dates between 2020 and 2022.

Local junket firms involved in the VIP gambling segment have also made contributions to the relief effort, with Suncity Group donating MOP5 million to families affected by Typhoon Hato.