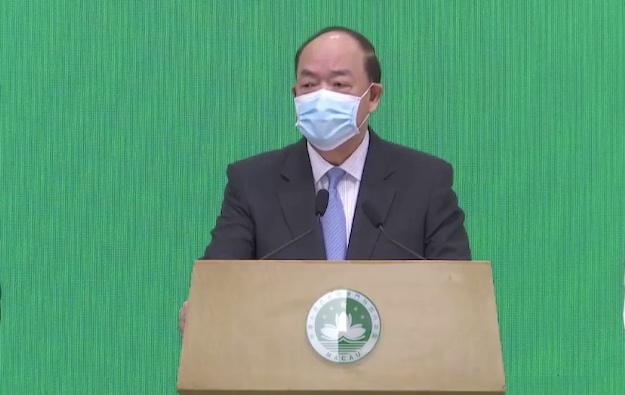 Macau’s Chief Executive, Ho Iat Seng (pictured), affirmed at a Wednesday lunchtime press conference that the government was not ordering the closure of the city’s casinos, despite a variety of “entertainment venues” being shuttered from after the stroke of midnight on Thursday (August 5) under an executive order.

The city has from Wednesday morning also instituted mass testing of the local population, after a local family of four was confirmed as having caught the highly-infectious Delta variant of Covid-19.

“The government now does not have plans to close casinos, because the problem did not happen there,” said Mr Ho, in response to questions from local media.

The Chief Executive added: “This is a scenario different from the last closure when two casino employees were confirmed with infection, hence the government decided to suspend at that time [February last year] the casinos for 15 days.”

Macau’s top official said additionally that if the MOP130-billion (US$16.2-billion) forecast for 2021 casino gross gaming revenue (GGR) is not achieved because of the “unpredictability of the Covid-19 situation,” the government will revise its budget for the current fiscal year.

Mr Ho also apologised during the briefing for a technical glitch that briefly saw the public’s access blocked to Macau’s online health code system. Generating a colour code under the system via a mobile digital device, is necessary for entry to most public places, and access to public services, including a Covid-19 test appointment.

The city’s leader said it was hoped the local Covid-19 situation could be controlled within 14 days, so that “normal life” could resume. He added it was hoped then Macau would see as much “economic vitality” as had been observed in May and June, when tourism had started to recover.

Mr Ho further noted the government did not rule out further mass tests among the local population, depending on the results of the current mass tests.

The Chief Executive also mentioned the authorities were working to track and confirm the origin of the Covid-19 infection concerning the local family, and to see if it stemmed from an “imported” case concerning a flight connected to the Nanjing airport cluster on the Chinese mainland.

The government had earlier on Wednesday said that under powers relating to the Law on Prevention and Control of Infectious Diseases, Macau would shutter: cinemas, theatres, indoor playgrounds, game-console and electronic-game rooms, Internet cafes, and billiard rooms.

Package tours from mainland China to Macau will resume from Monday, February 6, confirmed Macau’s Secretary for Economy and Finance, Lei Wai Nong, in a Friday press conference. The return of... END_OF_DOCUMENT_TOKEN_TO_BE_REPLACED