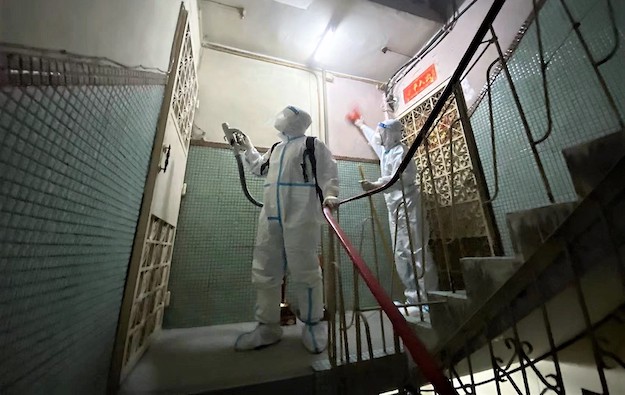 The first major outbreak of Covid-19 in Macau since October last year has seen the total number of confirmed cases rise to 31 – with 13 of an initial 21 patients showing no symptoms. The updated aggregate was given by the Macau government on Sunday evening, according to public broadcaster TDM. A state of “immediate prevention” against the risk of a mass outbreak had been declared by the local authorities at 1am on Sunday. Before noon that day, they had affirmed 12 cases, with the confirmed tally then rising to 21, by Sunday afternoon.

During a briefing on Sunday afternoon, Macau’s Secretary for Economy and Finance, Lei Wai Nong, was asked by a local media representative whether the city’s casinos would need to close temporarily.

He confined his comments to saying he was confident measures in place would be sufficient to tackle the situation.

Brokerage JP Morgan Securities (Asia Pacific) Ltd said in a Sunday note that the early-morning alert was the “largest local outbreak in over two years”, and that Macau’s casino gross gaming revenue (GGR) was “likely to go to near-zero levels”.

Analysts DS Kim and Livy Lyu wrote – in commentary before the Sunday afternoon press conference – that “casinos remain operational for now, but we wouldn’t be surprised to see revenues going to near-zero levels for at least [a] few weeks until the situation [is] under control, with minimal (if any) inbound visitation.”

Other operators had enough cash liquidity to last at least 1.5 years, even with constrained income. Galaxy Entertainment Group Ltd was in the best position, with “substantial liquidity of 60 months even under the zero- revenue environment,” said JP Morgan.

During Sunday afternoon’s government press conference, it was announced that non-essential public services would be closed on Monday and Tuesday. Nurseries, schools, public parks and other leisure facilities have also been temporarily closed until further notice.

Macau’s Legislative Assembly is scheduled to hold on Tuesday, June 21, a second-reading debate and final vote on a government-backed bill to revise the city’s gaming law. The Secretary for Economy and Finance said during Sunday afternoon’s press conference that there was no plan yet to postpone the vote.

According to Macau’s health authorities, the 21 cases detected as part of the latest outbreak are divided into two main clusters. The local authorities are still probing the source of the outbreak.

Of the 21 cases confirmed as of Sunday at 5pm, one involves an eight-month-old baby. The oldest confirmed patient is 89.

All the cases involve people that were not undergoing quarantine and were living within the community. Their places of residence have been sealed off to outsiders and disinfection work (pictured) was being done, stated the authorities. One local restaurant has also been sealed off.

The new Covid-19 infections include one worker at the city’s prison. Several cases involve Burmese nationals living in the same building and working in Macau.

Mass testing of the Macau population – via 53 testing stations – started on noon on Sunday, and is due to be completed in 48 hours.

From 6am on Sunday, anyone wishing to leave Macau has been required to submit a certificate issued within 24 hours of intended departure showing a ‘negative’ result for Covid-19 infection, the city’s government said in a press release.

Authorities in the neighbouring city of Zhuhai, Guangdong province, also announced that, starting from 9am on Sunday, people travelling from Zhuhai to Macau would need to present a certificate issued within 48 hours of departure, showing a ‘negative’ result for Covid-19.

The Macau authorities have also advised the local public to avoid leaving home. Restaurant dining-in has been temporarily banned: only takeaway sales are allowed.

Casino equipment supplier Sega Sammy Creation Inc said in a Friday release it was debuting its Genesis Crest 43J cabinet in Asia. The product will be available at an in-person trade show, G2E Asia:... END_OF_DOCUMENT_TOKEN_TO_BE_REPLACED