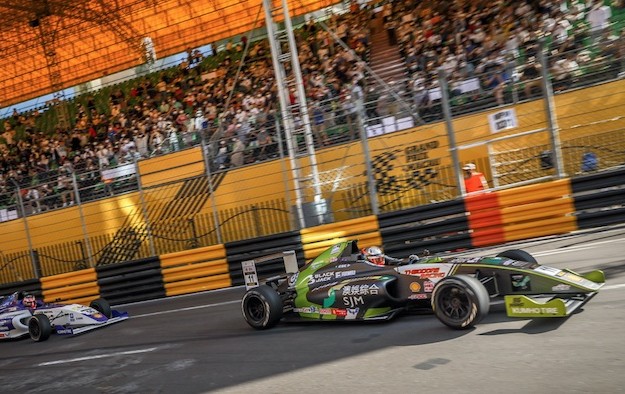 Macau’s average daily volume of inbound visitors had been circa “16,000″ between Thursday November 17 and Sunday November 20, when the city hosted the Macau Grand Prix meeting, said this Thursday a senior Macau tourism official. That was the same as the daily volume mentioned by the same official for a period prior to the motor racing event.

“The highest number of visitor arrivals seen was on Friday [November 18], which was around 21,000…” said Mr Hoi. He was speaking on the sidelines of a function hosted at downtown casino resort Wynn Macau, to publicise a Macau-Qingdao -themed beer festival due to be held at the Wynn Palace resort on Cotai in December.

“During the four days when the Grand Prix was taking place, the [city-wide] hotel occupancy increased by around 15 percentage points,” said Mr Hoi. He did not clarify the period of comparison.

Though he noted the tourism bureau “believed” the occupancy improvement “was due to tourists having stayed longer here to watch the Grand Prix”.

Mr Hoi added: “Of course we had hoped for more tourists in Macau with the events hosted here… but after all, there have been continuous Covid-19 cases happening in neighbouring places.”

That was understood to be a reference to Covd-19 infections on the Chinese mainland, the main source market for tourists to Macau.

On Wednesday, China’s National Health Commission recorded more than 31,000 new Covid-19 cases on the mainland in a 24-hour period. It was the highest single-day increase since April this year, according to media reports.

As part of Macau’s ongoing Covid-19 prevention measures, any mainland China community deemed as “high risk” for Covid-19 transmission is added to Macau’s quarantine-on-arrival list, applicable to inbound travellers from that place.

Mainland China remains the only place with a largely quarantine-free travel arrangement with Macau. But as of Thursday, an aggregate of 30 of mainland China’s 31 provinces, autonomous regions and major cities, had communities on Macau’s quarantine-on-arrival list.

Macau follows the national “dynamic zero” approach to Covid-19 containment. As of Thursday, the city had no lockdown zones. Macau’s Novel Coronavirus Response and Coordination Centre also clarified the same day that no ‘positive’ Covid-19 samples had been found in so-called “key zones” earmarked for mass testing during the period November 19 to November 23 inclusive.

Such testing was activated after a 60-year-old woman tourist from the mainland was confirmed as ‘positive’ for Covid-19 infection on November 19, after having visited multiple tourism sites around the city, including non-gaming areas at Sands China Ltd’s Cotai casino resorts.