Macau due 3 new rounds of Covid tests, more than 850 cases 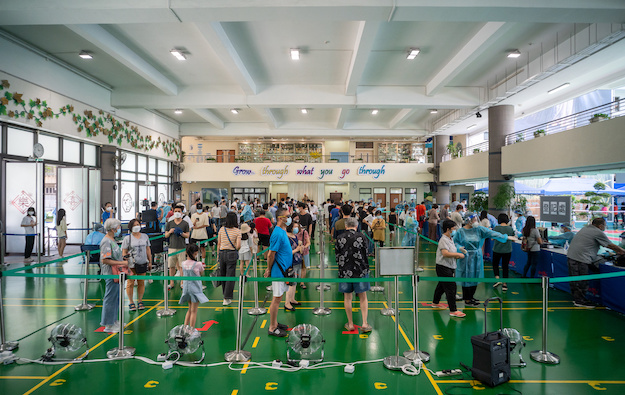 Macau is to have three more rounds of Covid-19 community nucleic acid testing since a current testing programme started on June 19, as the number of confirmed cases in the city’s latest outbreak had risen to 852 as of midnight on Sunday, and the city recorded the first two deaths associated with the disease.

The information on the new city-wide mass tests was given on Sunday at a press conference of the city’s Novel Coronavirus Response and Coordination Centre.

People in Macau are also being requested to do a rapid antigen test every day until July 9, using kits provided by the government.

According to separate information published on Sunday by the city’s health authorities, two elderly women who were ‘positive’ for Covid-19 infection died that day. The two women, aged 100 and 94, had pre-existing chronic conditions, said the statement. They were the first Covid-19 fatalities recorded in Macau since the onset of the pandemic in early 2020.

The first of the three new rounds of centre-based testing will start on Monday (July 4). Each of the new rounds will run for two days, until Saturday (July 9).

Banks in Macau will also resume operations but with limitations, such as opening just some of their branches, and running them for fewer hours per day.

Macau casino gross gaming revenue (GGR) fell to its lowest monthly tally this year in June – and the lowest since September 2020. June GGR was MOP2.48 billion (US$310 million), down 25.9 percent sequentially, and down 62.1 percent year-on-year, showed data released on Friday by Macau’s casino regulator.

Starting this month, casino staff, casino customers, and visitors are required to pass a rapid antigen test on each day of intended entry to a gaming venue, and report the ‘negative’ test results to the authorities so that they show on their individual health declaration systems.

The Macau government has also asked the city’s casino operators to reduce temporarily by as much as 90 percent the number of on-duty workers staffing the city’s gaming floors, according to media reports last week. The authorities have not made any public announcement on the measure.

The imminent return of package tours from mainland China will not only help boost Macau’s tourism businesses, but is also expected to help casinos gain more foot traffic in their mass gaming... END_OF_DOCUMENT_TOKEN_TO_BE_REPLACED