Macau due another round of Covid tests, now 71 local cases 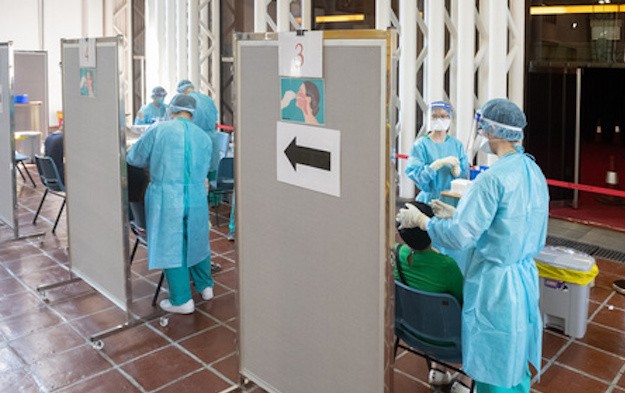 Macau is to have one more round of Covid-19 community testing since a current testing system started at noon on Sunday (pictured), as a Wednesday briefing revealed the number of confirmed cases in the city’s latest outbreak had risen to 71, with 47 people showing no symptoms.

The new round of centre-based testing will start at 9am on Thursday, and run until midnight on Friday (June 24).

Leong Iek Hou, a Macau Health Bureau official, said a number of people linked to casino premises – two table games dealers, one table games manager, one office worker and one cleaner – were among the ‘positives’. She said the cases collectively involved the Venetian Macao and the Galaxy Macau casino resorts in Cotai; and Fortuna, a casino hotel in downtown Macau.

The Fortuna premises had been locked down by the authorities on Tuesday, and the 380 people present taken to the Sheraton Macao Hotel for quarantine.

A number of other ‘positive’ cases related to other people who had been at casino resort premises, confirmed the official.

The news was given by the Novel Coronavirus Response and Coordination Centre at a 5pm press conference on Wednesday.

An initial 48-hour round of citywide centre-based testing had begun at noon on Sunday, after news of an outbreak – the first since October – had resulted in Macau going into a state of “immediate prevention” that same day, against risk of a wider problem.

The authorities also said on Wednesday that they had now identified three distinct clusters of initial infection – one more than previously. The new cluster related to a dry cleaning business in the city, and the authorities were still investigating the possible link between the three clusters.

Officials also stated during Wednesday’s update that an additional quarantine hotel in Macau – with circa 400 rooms – would be allocated for those testing ‘positive’ regardless of whether or not they had symptoms. The extra quarantine hotel – England Marina Club – is part of a new waterside development on Cotai, just beside Galaxy Entertainment Group Ltd’s Broadway Macau, but unconnected with it.

Casino equipment supplier Sega Sammy Creation Inc said in a Friday release it was debuting its Genesis Crest 43J cabinet in Asia. The product will be available at an in-person trade show, G2E Asia:... END_OF_DOCUMENT_TOKEN_TO_BE_REPLACED