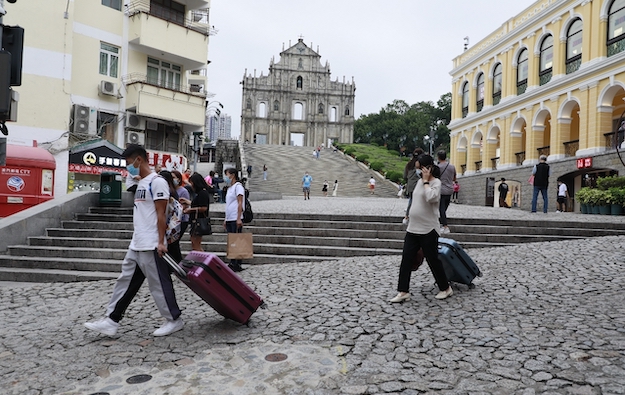 Macau’s gross domestic product (GDP) could fall by up to 29.2 percent this year, according to a revised version of the Macroeconomic Forecast for Macau 2022, published by the University of Macau (UM).

In its latest research, the UM team estimates that economic growth will decline by between 26.4 percent and 29.2 percent year-on-year, while the city’s exports of services will fall by between 31.3 percent and 33.6 percent.

The revised forecast was published on Wednesday by UM’s Centre for Macau Studies and its Department of Economics.

Macau’s GDP declined by 39.3 percent year-on-year in real terms in the second quarter of 2022, according to official data. That was a “steeper drop” compared to the 8.9-percent decrease in the first quarter this year.

The official figures showed that second-quarter exports of gaming services and other tourism services declined by 69.6 percent and 41.4 percent year-on-year respectively.

“In the first half of 2022, the economic conditions for Macau were extremely challenging,” noted the statement from UM. The Macau government “was forced to maintain stringent travel restrictions due to the different degrees of Covid-19 epidemic in neighbouring regions,” it added.

The institution also said that following the “relatively large-scale emergence” of Covid-19 infection cases in the Macau community beginning in mid-June, the GDP “fell sharply” in the second quarter, “returning to the level of the second quarter of 2020”.

The research team also noted that if the “overly stringent travel restrictions” in Macau are maintained, “it will be difficult for tourists to enjoy the services provided by enterprises and citizens in Macau”.

“Without tourism revenue, Macau’s economy may not be able to develop normally,” it added.

The Macau government has already launched several rounds of financial support schemes since the advent of the pandemic in early 2020, with the latest round announced earlier this month.

“However, current data show that these measures have only a short-term and limited impact, and cannot replace the incomes earned by the enterprises and citizens through normal market transactions,” stated the UM research team.

The Macau government recently revised its budget plan for 2022, in order to increase its welfare spending to mitigate the impact of the Covid-19 pandemic on the city’s economy.

It also lowered its forecast for gaming tax for the full year to MOP34.37 billion (US$4.25 billion), from a previous forecast of just under MOP49.76 billion. By the end of August, the government had collected just 41.3 percent of the revised figure.