Macau govt expects up to 50k visitors a day during CNY 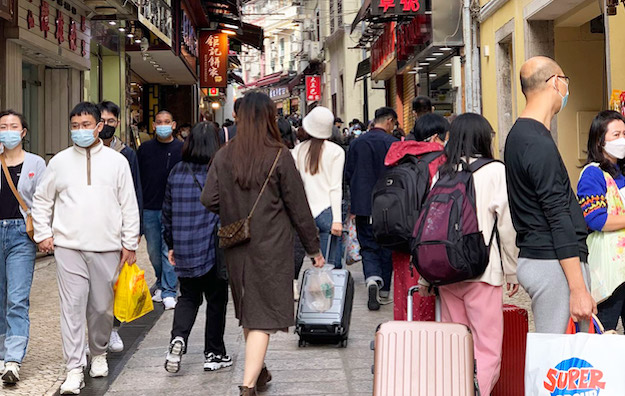 A Macau government official said on Thursday it was hoped daily visitor volume to the city during the seven days of the upcoming Chinese New Year holiday could reach at least circa 25 percent of the same festive period in 2019.

Cheng Wai Tong, deputy director at Macao Government Tourism Office (MGTO), said his bureau forecast 40,000 to 50,000 arrivals daily during the upcoming holiday, compared to about 170,000 per day for the 2019 break.

The official noted that the transport services to support Macau inbound tourism – which encompass ferries serving Hong Kong, flights to the Chinese mainland and beyond, and bus services via the Hong Kong-Zhuhai-Macau Bridge – were yet to return to pre-pandemic levels, following the easing of Covid-19 protocols earlier this month.

He was speaking to the media on the sidelines of a briefing about Macau’s Chinese New Year parade to mark the Year of the Rabbit.

Macau is gradually resuming a number of transport services between Macau and Hong Kong, between Macau and cities in mainland China, and between Macau and overseas destinations. The city’s Civil Aviation Authority announced on Thursday the approval of a number of applications by several air carriers for either service resumption or increase of frequencies for flights to and from Macau, to cope with demand for the Chinese New Year period.

China’s State Council has designated the holiday period for mainland residents as January 21, a Saturday; to January 27, a Friday, inclusive. The festive break in Hong Kong – another important source market for Macau’s tourists – is designated as running from January 23 to January 25.

Inbound travellers from Hong Kong that stay at least one night in Macau are being offered a free journey back to Hong Kong via either bus or ferry. The promotion applies to “Hong Kong residents” for any one visit made during the period January 13 to March 31 inclusive, and is part of a campaign launched this week by MGTO.

A survey by GGRAsia indicates that most hotels at casino resorts in the city’s Cotai district are already sold out for this Chinese New Year, though a hotel trade representative noted it was possible that not all the room inventory of the venues would be available to the market, due to factors including staff shortages due either to Covid-19 infections, or a reduction in the sector’s labour force during the three years of pandemic alert and tourism market shrinkage.

Some Macau casinos visited by GGRAsia on Thursday, actually had tables that were closed, notwithstanding strong consumer demand during Chinese New Year (CNY). The reasons for some tables being... END_OF_DOCUMENT_TOKEN_TO_BE_REPLACED