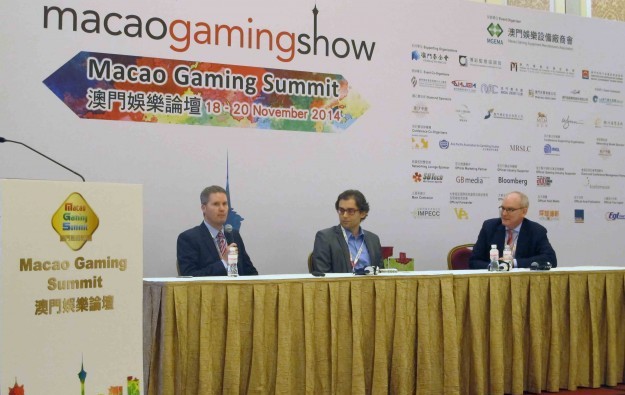 The Macau gaming market has been going through a rough patch in recent months but the long-term story for the city’s casino industry remains solid, two investment analysts told the audience of the Macao Gaming Summit on Wednesday.

Casino gross gaming revenue (GGR) in Macau dropped by 23 percent year-on-year in October, making it the fifth consecutive month that GGR has declined judged against year prior periods, the most sustained retreat since 2009.

Uncertainty in the market has been increasing, especially after October, when mass revenue dropped about 8 percent year-on-year, according to unofficial industry returns. Industry observers say the smoking ban on casino mass floors enforced on October 6, the ongoing retreat in VIP play, the Hong Kong protests and the credit drop in mainland China are taking its toll on Macau’s casino industry.

The recent headwinds could have an impact on the opening of the new projects planned for Cotai, said Grant Govertsen (pictured left), analyst at Union Gaming Research Macau Ltd.

Most Cotai projects remain on schedule according to casino company filings. But MGM China Holdings Ltd said in its first half results in August that the opening of the US$2.9 billion MGM Cotai would likely for “fall 2016” rather than “early 2016” as stated previously.

“If we saw a scenario where these significant headwinds persist in Macau, perhaps we will see other projects delaying [their opening dates],” Mr Govertsen added.

That possibility however is a remote one, the analyst added.

He explained: “If the headwinds persist and we don’t see a recovery by the third quarter of 2015, at that point is probably too late to put the brakes on construction as they [operators] already spent a lot of money [on construction].”

“I don’t expect delays at that point simply because some cash flow is better than no cash flow,” he said.

There are two projects due to open in 2015 – Galaxy Macau phase 2 of Galaxy Entertainment Group Ltd, and Studio City, the second Cotai property by Melco Crown Entertainment Ltd.

“The slowdown [in GGR] since June doesn’t appear to have anything to do with visitation, which continues to be strong,” said Standard Chartered analyst Philip Tulk (pictured right). “On the VIP side, we’ve seen some negative trends, which I think are about funding and credibility of junket models,” he added.

The two analysts were speaking at the conference accompanying the Macao Gaming Show. Emanuel Graça, one of GGRAsia’s principals, moderated the panel.

“It is pretty much consensus that VIP will be down double digits at least in the first quarter. Positive growth rates in VIP should return in the second half, probably in the third quarter [of 2015],” he said.

A wild card in the mix could be the opening of Galaxy Macau phase 2, said Mr Govertsen.

“If it opens in mid-second quarter, we would probably see a bit more liquidity injected into the sector and a little bit of VIP growth,” he added.

Macau’s growth story however is far from over, both analysts said.

“This was an incredibly hot sector at this time last year and for most of the last five years. We are obviously going through a rough patch but the sector is going to turn around,” said Mr Tulk.

Macau-related casino stocks have taken a beating in recent months following the slide in casino revenue.

Investors are on the sidelines waiting for the right time to get in, stated Mr Govertsen. “There is a ton of money sitting on the side and investors are taking their time. We are seeing a lot of interest from European investors in this [Macau] market,” he said.

“Probably it [the Macau market] can get a little bit worse, but once it turns around you’ll see a flood of money and these [casino] stocks reacting violently to the upside,” Mr Govertsen added.