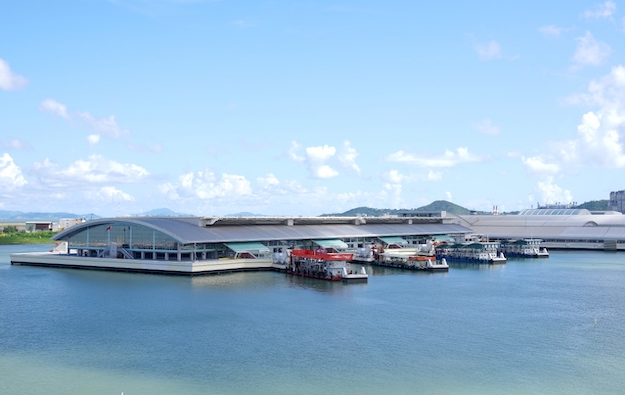 Ferry services between Macau and Hong Kong are to resume in stages starting from Sunday (January 8), said Macau’s Marine and Water Bureau in a written announcement on Thursday.

Two ferry operators, TurboJET and Cotai Water Jet, will initially restart daytime sailings between the Sheung Wan ferry terminal in Hong Kong and the Taipa Maritime Passenger Terminal (pictured), near Macau International Airport.  In a first phase, about 10 round trips per day in aggregate will be launched by the two operators, stated the announcement.

It added the two ferry operators would adjust the number of sailings “in a timely manner”, after assessing the volume of passengers.

The bureau also said it had carried out “preparatory work” in collaboration with the ferry operators, including navigation and mooring trials, and inspection of the ferry terminal facilities.

The decision to resume sailings between Macau and Hong Kong came after it was announced on Thursday that Macau is to cancel with effect from Sunday most of its travel restrictions related to the Covid-19 pandemic, dropping all testing requirements for inbound travellers from mainland China, Hong Kong and Taiwan.

On the same day, the authorities on the Chinese mainland announced that travel restrictions with Hong Kong and Macau would be substantially eased from Sunday, with most Covid-19 controls due to be scrapped.

In a Thursday press release, Cotai Water Jet confirmed that it would resume ferry services between Macau and Hong Kong, starting from January 8. The ferry operator, owned by Macau casino concessionaire Sands China Ltd, said it will provide three round trips per day “at the beginning of service resumption”.

Alfred Ng Sio In, director of the Macau services division at TurboJET, said earlier this week that his company was planning to launch eight round trips in a first phase. He added that routes to other terminals and nighttime sailings would resume in a phased manner, “depending on the situation”.

A limited number of ferry services between the Taipa ferry terminal and Hong Kong International Airport restarted on December 30.

Some Macau casinos visited by GGRAsia on Thursday, actually had tables that were closed, notwithstanding strong consumer demand during Chinese New Year (CNY). The reasons for some tables being... END_OF_DOCUMENT_TOKEN_TO_BE_REPLACED