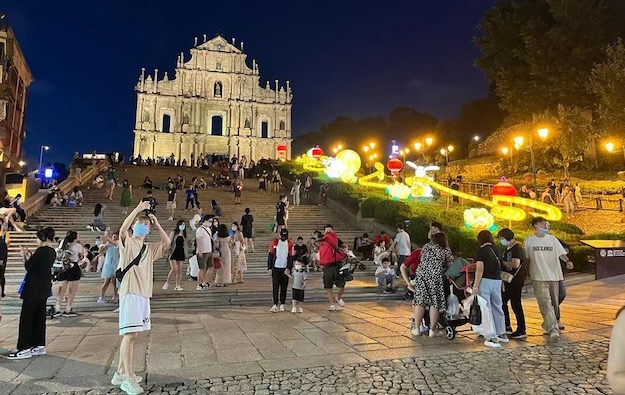 The Macau government has announced a new subsidy scheme for local travel agencies, with the aim of attracting more mainland China tourists and getting such visitors to extend their stay. The subsidy plan, to be implemented in 2023, is being run by the Macao Government Tourism Office (MGTO).

The scheme offers up to MOP250 (US$31) per night per tourist from mainland China, for tour groups that comprise at least 10 people. The application for subsidy would have to be submitted by local travel agencies, according to the announcement.

Tour groups must come from the provinces of Guangdong, Zhejiang, Jiangsu and Fujian, and the city of Shanghai, and the whole group must depart from the same place, stated MGTO.

Each tour group must be received by local travel agents in Macau, which will handle the tour itinerary and the lodging in licensed hotels, the tourism bureau added.

Eligible travellers from neighbouring Guangdong province would generate a MOP150 subsidy per head for the first night of stay, up to a maximum subsidy per head per trip of MOP300, if the tourist stays two consecutive nights or more. For the other authorised points of origin, the available subsidy would be MOP250 per person for the first night, up to a maximum subsidy of MOP400 per person for stays of two consecutive nights or more.

Applications from licensed travel agencies are currently being accepted. The maximum amount of subsidy per group will depend on the number of people in the group, the departure point, and the number of hotel nights in Macau.

The Macau authorities and their mainland counterparts have been discussing details for the gradual resumption of package tours.

The Macau government has budgeted MOP650 million for “expanding sources of tourism” in 2023, with incentives including discounts on flight tickets and on hotel accommodation, said in November the city’s Secretary for Economy and Finance, Lei Wai Nong.

International casino operator Las Vegas Sands Corp has been ranked as the most sustainable firm in the global casino sector, according to the 2023 edition of the S&P Global Sustainability... END_OF_DOCUMENT_TOKEN_TO_BE_REPLACED