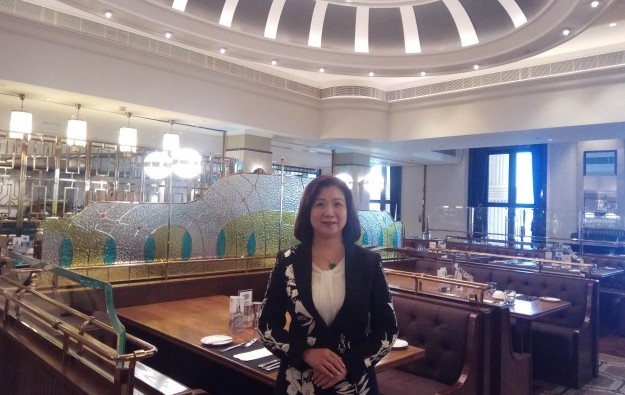 Gaming and hospitality services firm Macau Legend Development Ltd still doesn’t know when it might return to positive earnings before interest, taxation, depreciation and amortisation (EBITDA), amid the still-challenging business environment for its markets in Macau and Southeast Asia. That is according to an executive director of the firm, Melinda Chan Mei Yi (pictured), in comments to the local media on the sidelines of Macau Legend’s annual general meeting on Monday.

“It is still very difficult to forecast when we can see a positive EBITDA,” said Ms Chan, citing concerns regarding the current Covid-19 situation in Asia, and uncertainties regarding the resumption of normal travel ties.

Recovery in visitor numbers and hotel business at Macau Fisherman’s Wharf had been slow so far, Ms Chan stated. But the firm did see improvement in gaming earnings and in hotel occupancy during the five-day break surrounding Labour Day on May 1, she said.

“Our hotel occupancy for the holiday has been 100 percent,” Ms Chan told, “…but the room rates for those days were still a distance away from 2019 level.”

The Macau Legend executive also noted regarding the firm’s gross gaming revenue (GGR) recovery during the early-May holiday: “At Legend Palace, it [GGR] was almost half [of 2019 level]; while at Babylon [Casino], it was about 30 percent to 40 percent of 2019 level.”

The key “constraints” were “social distancing” on the gaming floors, which had restricted customer capacity, Ms Chan said. She added: “Also, we are just a small-scale [gaming] operation, with about 110 gaming tables only at Legend Palace and Babylon Casino.”

Regarding the Legendale Hotel scheme, she stated:  “When the design plan is out, we will ask the government for approval. And only by then, we can ascertain the overall investment amount and consider the financing channels for the project.”

Ms Chan also suggested the firm would solicit public opinion on the redesign. An earlier plan had produced questions locally, concerning its height. The fresh design would be available “in the fourth quarter” at the earliest, Ms Chan said.

Currently, the reopening timetable for Savan Legend Resort was still uncertain, though the firm had already completed the hotel expansion and gaming facilities upgrade at this Laos property, she said.

Some Macau casinos visited by GGRAsia on Thursday, actually had tables that were closed, notwithstanding strong consumer demand during Chinese New Year (CNY). The reasons for some tables being... END_OF_DOCUMENT_TOKEN_TO_BE_REPLACED