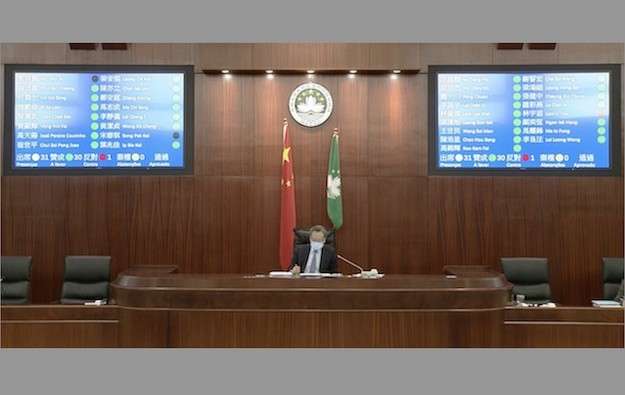 After more than two hours of debate, members of Macau’s Legislative Assembly approved on Monday the first reading of a gaming bill that will shape how the industry looks for years ahead, with 30 voting in favour and one voting against the government-backed bill.

The government has said previously Macau’s gaming law needs to be updated as a linked issue to a fresh public tender process for Macau gaming rights associated with the expiry of the current permits in June this year.

The draft law says that up to six new concessions will be permitted, with a maximum term of 10 years, with a three-year extension possible under certain circumstances.

The Macau government has also proposed in its bill a formal cap on the number of casino tables and gaming machines in the local market, a minimum annual target of casino gross gaming revenue (GGR) that the city’s six operators will have to meet, and tighter controls on the operation of junkets and satellite gaming venues.

Macau’s Secretary for Economy and Finance, Lei Wai Nong, attended the plenary meeting on Monday to present the bill to legislators. During the session, Mr Lei admitted that the whole process might not be completed by the time the six current casino concessions expire on June 26 this year.

Were that to be the case, the Macau government would consider an extension of the existing concessions, he stated, adding that the “actual extension term” would eventually be announced later. Under the existing law, such extension can be in increments, up to a maximum of five years from the original 20-year licence term.

A total of 11 legislators raised a number of questions regarding the draft law, voicing concerns specifically about a proposal to have the city’s so-called “satellite” casino venues tie their premises to gaming concessionaires, and the potential impact such measure might have on local employment.

Currently, there are 18 satellite casinos in the city; venues controlled by independent investors but that have piggybacked on the gaming licence of one of the existing concessionaires, via a so-called service agreement. According to the bill, satellite casinos will be given a three-year grace period to comply with the new rule.

On Monday, Secretary Lei said of the government’s intention regarding satellite venues: “We are not killing the [gaming] industry.” He argued that as a public concession, gaming rights are granted to concessionaires, thus commercial operation of gaming should only take place in assets that are owned by the concessionaires.

Mr Lei also recalled that – under the existing framework – casinos and gaming equipment shall automatically revert to the Macau government once a concession expires. As such, it was important to ensure that in the future, all gaming venues are located within properties owned by the concessionaires, said the official, adding that the issue could be further discussed in one of the working committees of the assembly.

The bill also details what would be expected of new licensees in terms of corporate social responsibility (CSR), including support for local small and medium-sized enterprises; promoting the development of local industries; ensuring employment of the local population; support for activities of “public interest”; and support for fields including education, science, culture, sports, and the environment.

Mr Lei said the specific CSR requirements would be detailed in the tender document for fresh gaming licences, as well as the necessary standards for non-gaming investment.

Following the first-reading approval, the bill will now be assigned to one of three working committees of the assembly for detailed examination. The committee might make recommendations for revisions and after it has issued a report, the bill returns to the full assembly for its second and final reading.