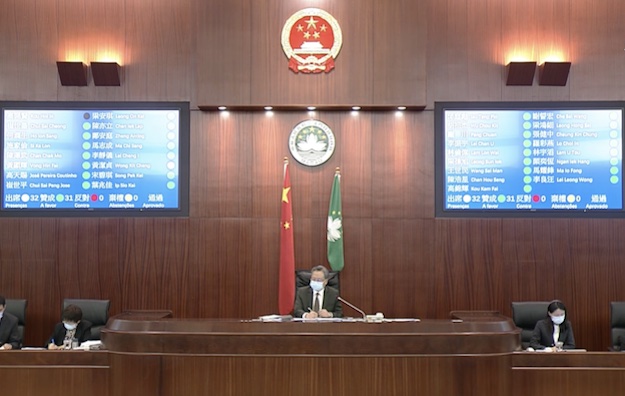 The voting of the law at the city’s Legislative Assembly (pictured) is a key step in Macau preparing for a fresh public tender for gaming rights, when the current ones expire this year, the local government has said. All six operators are expected to take part in a fresh tender, with some spelling out in their statements that they were doing preparatory work.

JP Morgan Securities (Asia Pacific) Ltd said in a note after the bill passed, that it expected the tender process to begin possibly as early as the end of July.

The phrase “sustainable development” is often used by the Macau government to describe one of its key areas of interest regarding the casino industry. In some years after liberalisation, Macau’s casino gross gaming revenue (GGR) had seen significant year-on-year growth, fuelled often by VIP baccarat players from mainland China. The local government had been wishing to see diversification of the market in that regard.

Melco Resorts and Entertainment Ltd said in its statement on Tuesday that it was “fully confident in the development of Macau’s integrated tourism and leisure industry, and will continue to promote economic diversification to further strengthen Macau’s position as a world centre of tourism and leisure”.

The diversification of Macau’s economy beyond a concentration on casino gambling has been another key interest of the local authorities, and of China’s central government.

MGM China Holdings Ltd said in its reaction to the law’s passage it was “full of confidence” regarding the “future development of the Macau”.

The Sands China executive added: “The company is once again very grateful to the [Macau] government for carrying out extensive consultations throughout the entire legislative process, which led to a consensus among the general public.”

SJM Holdings Ltd said the law revision provided “new regulations and clear guidelines for the healthy and orderly development of Macau’s gaming industry, to pave the way for the long-term prosperity and stability of the city”.

Wynn Macau Ltd said it was “pleased” that the gaming law amendment had been approved, adding the firm wished to show its “appreciation to the government and the Legislative Assembly for the very efficient process and collaborative engagement with all of the stakeholders”.

Casino equipment supplier Sega Sammy Creation Inc said in a Friday release it was debuting its Genesis Crest 43J cabinet in Asia. The product will be available at an in-person trade show, G2E Asia:... END_OF_DOCUMENT_TOKEN_TO_BE_REPLACED