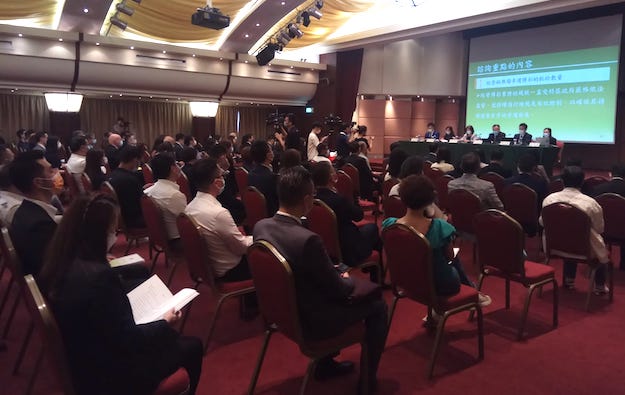 The Macau government should give more detailed information on its proposed new regulatory requirements for the city’s gaming sector, in particular the idea of raising the minimum share capital required for the gaming companies, and the idea that the portion of a gaming concession entity that must be held by a Macau permanent resident should be increased.

Lawyer Rui Cunha, secretary-general of SJM Resorts Ltd – the SJM Holdings subsidiary that holds the group’s Macau gaming licence – said during the Monday consultation session that clarification would be helpful on the minimum share capital topic and the locals’ shareholding topic.

Galaxy Entertainment senior vice president of public relations, Buddy Lam Chi Seng, also mentioned those subjects. He also asked about the government’s suggestion of appointing “delegates” to oversee how gaming operators fulfil their concession duties, and whether such an arrangement had “potential impact” on gaming firms’ daily operations.

Ku Mei Leng, chief-of-office of Macau’s Secretary for Economy and Finance, replied that the government did not have any “predetermined positions” on the topics, as it was still gathering opinion from the industry regarding proposed changes to Macau’s gaming law framework.

Ms Ku mentioned that a delegate system was already  being used by the government to monitor other forms of public concession in Macau.

Such a delegate system was “properly regulated”, and there should not be “big difficulties” in accommodating it into the gaming concession system if using the same model applied to other forms of public concession, said SJM Resorts’ Mr Cunha.

He added the company was not opposed to the government’s proposal to end the casino “sub-concession” system.

Linda Chen, vice-chairman and chief operating officer of Wynn Macau Ltd, remarked to the media on the sidelines of the Monday consultation, that she would also appreciate further guidance from the Macau government on the additional regulatory requirements intended for the gaming companies, including the suggested government approval required for dividend distribution to the gaming firms’ shareholders.

Such move by the Macau government could restrict the city’s gaming operators’ capacity for dividend payout, Wynn Macau Ltd’s chairman, Allan Zeman, had said in comments cited by the Hong Kong Economic Journal, in an interview published on Monday.

“As long as the regulatory aspect [as defined] in this legal framework is transparent, it will be positive and good for our industry’s long-term development,” remarked Ms Chen to reporters in Macau on Monday. She also looked forward to fresh discussions with the authorities on gaming operators working to help Macau diversify its tourism offerings.

Several casino operator representatives said in the Monday consultation session that they would later submit a detailed written opinion to the Macau government on its gaming regulatory proposals.

Delegates from several junket operators and respective trade associations also attended the Monday consultation. Several asked the government to clarify what acts would constitute the crime of illegal acceptance of funds. The suggested penalty for such a crime is up to five years of imprisonment, or a fine.

The government representatives present did not give specific replies to the junkets’ queries.

Patrons’ capital lodged with junkets used only for gambling purposes should still be legitimate, according to both the current rules and the government-drafted new rule against the so-called illicit deposit taking activities, several legal experts have suggested to GGRAsia.

A further four face-to-face sessions in the government’s 45-day public consultation will be for the general public. They are on September 29, October 9, October 13 and October 19.

A Macau court was offered evidence on Monday, including of recordings from police-wiretapped telephone conversation, that the prosecution says proves the direct involvement of Levo Chan Weng Lin... END_OF_DOCUMENT_TOKEN_TO_BE_REPLACED