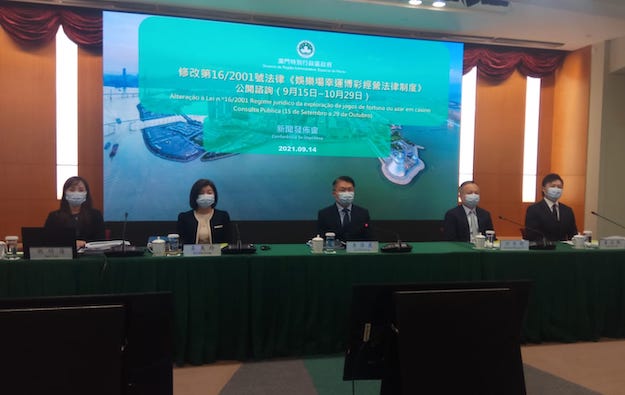 A public consultation process regarding the revision of the city’s gaming law will be launched on Wednesday (September 15), says the Macau regulator, the Gaming Inspection and Coordination Bureau, a body also known as DICJ.

The public consultation period will run until October 29, said the gaming regulator in a Tuesday press briefing.

Lei Wai Nong (pictured, centre) Macau’s Secretary for Economy and Finance, reiterated during the media briefing, a public policy aspiration contained in Macau’s latest Five-Year Development Plan – namely the “healthy and sustainable development” of the gambling industry through improvements to the regulatory system of casinos. He also mentioned a public-policy aim to increase the “competitiveness” of the city’s casino industry.

The Macau government has aimed to complete the revision of the gaming law by the fourth quarter this year, prior to submitting a finalised draft bill to the Legislative Assembly.

The city’s current six gaming concessions are due to expire in June 2022, unless the authorities grant a form of limited extension as permitted under current Macau gaming law. The government has said Macau’s gaming law needs to be updated as a linked issue to a fresh public tender process for Macau gaming rights.

During Tuesday’s media briefing, Mr Lei mentioned the public consultation would cover nine main topics. They included: how many public concessions there should be – a question implying Macau would not seek to move to a system for individually licensing casinos, as had been proposed in some quarters.

Other topics were: the duration of any new concession term; what new regulatory requirements should be applied to concessionaires; steps to protect local employment; and how to help Macau ID holders move up the career ladder in the industry.

Further topics for the public consultation were: promotion in the industry of non-gaming; the corporate social responsibility of the industry; how to step up scrutiny of junkets and their business collaborators; and how to tackle the issue of deposits made by private investors in the gaming sector, that have in the past sometimes led to members of the local public sustaining losses.

The decision by the Macau government to grant fresh 10-year licences to each of the city’s six incumbent casino operators has been welcome by top management at those firms. Each of the concessions... END_OF_DOCUMENT_TOKEN_TO_BE_REPLACED