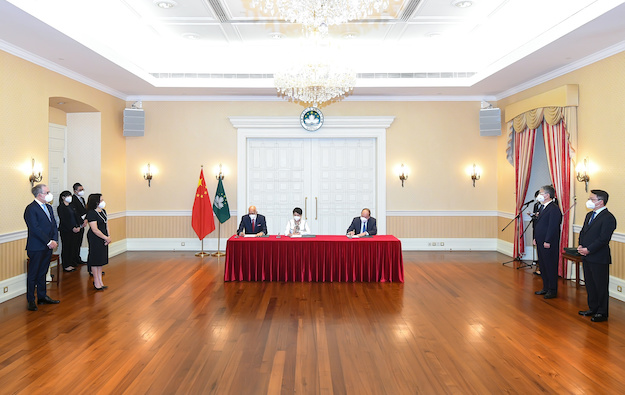 Macau’s six casino operators have each signed on Thursday a circa six-month extension to their respective gaming contracts, to December 31. The licences had been due to expire on June 26, but were extended as the Macau authorities work to prepare a fresh public tender.

In a Thursday statement, the Macau government said it had approved the extension after considering the fact that the new-tender exercise could not have been completed by June 26. The extension was to “ensure” the “smooth progress” of the process.

In return for the extension, the six casino firms are each required to make a one-off payment amounting to MOP47 million (about US$6 million) to the government. Additionally, the companies were each required to provide a guarantee – within three months of the signing of the contract extension – to cover any payments that might come due to their workers.

Macau’s Legislative Assembly approved on Tuesday a government-backed bill to revise the city’s gaming law. The amendment bill says that up to six new concessions will be permitted, for a maximum term of 10 years, with a three-year extension possible under certain circumstances.

Each of the operators issued a statement on Thursday, welcoming the extension of their respective contracts. They also confirmed that they had each signed “undertaking letters” effecting the transfer to the Macau government, without compensation, of relevant casinos and related assets on termination of their respective gaming concession contract, as required by law.

Sands China Ltd said it was “very pleased” with the Macau government’s announcement of an extension to the company’s licence contract. The firm said it would “comply with, and abide by, the revised gaming law to contribute to the healthy and sustainable development of Macau’s gaming industry.”

“Sands China will proceed to submit its bid for a gaming concession in accordance with the timetable” set by the Macau government, it added.

In a filing to the Hong Kong bourse, Sands China said the group would provide a bank guarantee in an amount of approximately MOP2.31 billion to the government “to guarantee the satisfaction of its existing commitment of labour liabilities” upon expiry of its contract.

A release by SJM Holdings Ltd quoted the company’s chairman, Daisy Ho Chiu Fung, saying the group “welcomes this concession extension”. She added it was “moving ahead on all fronts preparing to participate in the tender for the succeeding concession”.

Wynn Macau Ltd said the contract extension would enable the company “to make continued contributions to the future development of Macau and the local community.”

It added: “We look forward to the announcement of the requirements and details of the public tender process for the new gaming concessions and will liaise closely with the government to make thorough preparations for active participation in the bidding.”

Wynn Macau Ltd said it would provide a bank guarantee “of not less than MOP1.21 billion” to the Macau government for “securing the fulfilment of its labour liabilities.”

A release from Galaxy Entertainment Group Ltd quoted Lui Che Woo, the group’s chairman, as saying the company was “truly grateful” for the “six-month extension of the gaming concessions, and the preparation of the tendering process.”

The company, which will have to provide a bank guarantee of MOP1.63 billion, stated that it was “ready to participate in the tendering process for the new gaming concessions.”

MGM China Holdings Ltd said it was “pleased” with the extension of its contract and confirmed in a separate filing that it would submit a bank guarantee to the government of not less than MOP880 million.

“MGM China will make every effort to obtain the new gaming concession in the upcoming public tender,” it added.

Melco Resorts and Entertainment Ltd said the extension of the gaming contracts “sets out a smooth transition ahead of the tender for the new concessions.” The firm said it would submit a bank guarantee of MOP820 million to “guarantee the satisfaction of any labour liabilities upon expiry” of its licence.

It added: “The company looks forward to participating in the forthcoming public tender for the award of a gaming concession.”

Casino equipment supplier Sega Sammy Creation Inc said in a Friday release it was debuting its Genesis Crest 43J cabinet in Asia. The product will be available at an in-person trade show, G2E Asia:... END_OF_DOCUMENT_TOKEN_TO_BE_REPLACED