Macau ops to offer fewer than 30pct of tables at restart 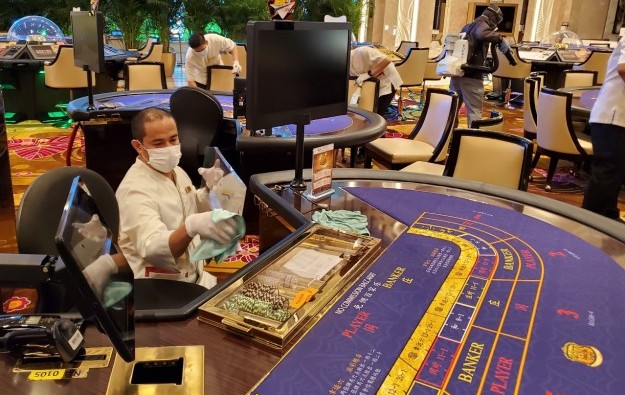 The Macau casino regulator said on Wednesday that only 29 of the 39 active casinos in the city would reopen after the stroke of midnight on Thursday. The other 10 active casinos have requested more time to resume their respective operations, said Paulo Martins Chan, director of the Gaming Inspection and Coordination Bureau, a body also known as DICJ.

Mr Chan said additionally that the casinos that are to resume operations on Thursday would only offer about 1,800 gaming tables. That represents “below 30 percent” of the existing gaming tables in the market, he said during a Wednesday government briefing. Currently, there are an aggregate of 6,754 gaming tables in Macau casinos, according to Secretary of Economy and Finance Lei Wai Nong in a Monday government press briefing.

The Macau government said on Monday that it had decided not to extend the current closure of the city’s casino industry. The government said however that the city’s casinos would not all be obliged to reopen with effect from Thursday and would instead be given permission to apply for a grace period of up to 30 days before resuming casino operations.

According to Mr Chan, the casino at Sands Cotai Central, a property from Sands China Ltd, is one of the venues that will remain closed beyond Thursday. The gaming venue at the Altira Macau casino hotel – a property run by Melco Resorts and Entertainment Ltd – will stay shuttered until further notice. The hotel at Altira Macau has been temporarily closed since February 10 “until further notice in order to curb the spread of the new strain of coronavirus,” according to the property’s official website.

Other properties that have requested not to reopen by Thursday included the Jai Alai – Oceanus casino complex, and Casino Eastern at the Grand Lapa hotel, both venues on the Macau peninsula; Casino Taipa, at the Regency Art Hotel; and the Casino Macau Jockey Club in Taipa, located in The Macau Roosevelt Hotel – all four gaming venues operated under the licence of SJM Holdings Ltd.

The Macau government had already announced on Tuesday that the reopening of the city’s casinos would involve special arrangements regarding density of seating for customers at gaming tables and a minimum space being required between operational tables. The regulator announced also restrictions to the use of slot machines in the casinos.

Macau’s casino operators have confirmed to GGRAsia that they would adopt phased reopenings of their respective gaming venues. The companies said normal operations would resume as “guest demand” picks up.

A spokesperson from Macau casino services firm Macau Legend Development Ltd confirmed to GGRAsia on Wednesday that the gaming and hotel properties at its Macau Fisherman’s Wharf complex would “reopen in phases”.

“The Harbourview Hotel has operated continuously throughout. Legend Palace Casino, Legend Palace Hotel and Babylon Casino will reopen on February 20,” said the person. “Those restaurants and supporting services within [those properties] will resume gradually to commensurate with demand. Rocks Hotel will reopen at a later date,” the spokesperson added.

Macau junket investor Suncity Group has also confirmed to GGRAsia on Wednesday that the majority of its VIP gambling clubs in the Macau market would resume operations on Thursday.

Tak Chun Group, another Macau junket investor, also announced that it would resume operations of its VIP clubs in the city from Thursday. It said in a public statement that guests to its venues would be required to fill out personal health declarations and to wear protective face masks.

In Wednesday’s press briefing, Mr Chan admitted there would be a steep fall in casino GGR this month, but stressed that safety of guests and casino staff was the priority. The official said also that the government expected reduced traffic and revenue once casinos resume operations on Thursday.

“But we are optimistic [about the industry’s prospects] in the long term,” sated Mr Chan.

Health Bureau director Lei Chin Ion said at the same press briefing that the closure of the city’s casinos was “highly effective” in helping to control in Macau the spread of the viral pneumonia pathogen. “Once the casinos closed, there was a significant reduction in the number of visitor arrivals to Macau, and tourists that were already here went back to their home places,” said Mr Lei.

Hotels at casino resorts were not included in the original shutdown order, but some casino operators had chosen to shutter some of their hotels for operational reasons, with occupancy levels said to have plummeted coinciding with the casino shutdowns and a temporary ban on exit visas for residents of mainland China to visit Macau.