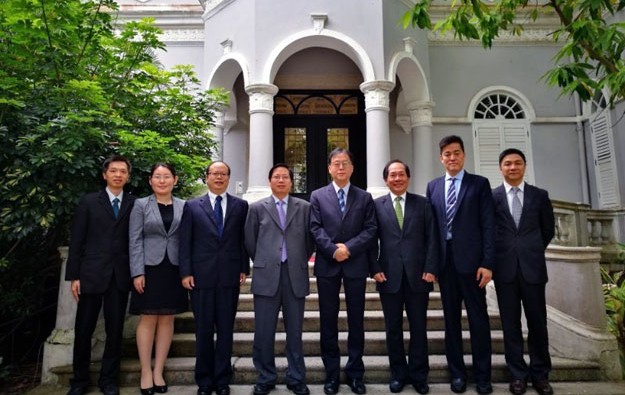 The Monetary Authority of Macao announced on Friday the establishment of a “Financial Security Expert Alliance”, in collaboration with the People’s Bank of China and the Hong Kong Monetary Authority. The new task force was described as a body to maintain and promote “the security and stability of financial markets” and contribute “towards national financial security and stability,” said the body in a press release.

The announcement followed a meeting in Macau between senior officials (pictured) of the three institutions. One of the objectives of the alliance is to promote effective measures against money laundering and the financing of terrorism, added the release.

The release additionally said that the Financial Security Expert Alliance would make good use of “Macau’s unique environment to accumulate practical experiences in regard to financial security”.

A recent focus for the Macau government has been to tighten controls on the large volumes of money flowing through the city’s casinos via VIP gambling.

The Macau government announced earlier this month that holders of Chinese mainland-issued China UnionPay Co Ltd cards that wish to use them for cash withdrawal at Macau automated teller machines (ATMs) would soon have to present their identity card and pass a facial recognition scan.

Last December, the Monetary Authority of Macao had set a limit of MOP5,000 (US$626) or HKD5,000 per transaction for withdrawals in the city’s ATMs using bank cards issued by mainland China banks. The total daily withdrawal limit with the use of such cards remained at CNY10,000 (US$1,447), or at an annual withdrawal limit of CNY100,000.

Also last year, shops in Macau began introducing China UnionPay bank card payment terminals that require holders of China-issued cards to submit an identity document for scanning before their purchase can be confirmed.

In a separate statement also on Friday, the Hong Kong Monetary Authority also stated its “determination” to fight serious financial crime and money laundering, in a sign of a more co-ordinated approach by the two regions and authorities in the mainland.

Hong Kong’s financial regulator also announced the setting up of a “Fraud and Money Laundering Intelligence Taskforce”, in a bid to “enhance the detection, prevention and disruption of serious financial crime and money laundering threats”. The task force was launched in partnership with Hong Kong’s police, the Hong Kong Association of Banks and several banks in that city.

Macau gaming operator Wynn Macau Ltd is asking some management-level staff to volunteer to take 10 percent of their monthly base pay in the form of company stock, according to a notice recently sent... END_OF_DOCUMENT_TOKEN_TO_BE_REPLACED