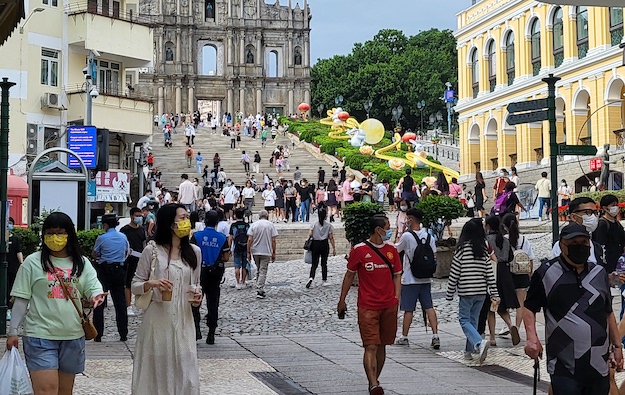 Macau logged an aggregate of more than 182,000 visitor arrivals from October 1 to 7 inclusive, during the so-called autumn Golden Week, according to the city’s authorities. Approximately 163,000 of the visitors were from mainland China.

Preliminary data disclosed by the Macao Government Tourism Office over the weekend showed the city recorded an average daily volume of around 26,000 inbound visitors during the seven-day holiday period. The figure was up by 32.8 percent in comparison to the daily average achieved across the whole of September, the bureau said.

In year-on-year terms, autumn Golden Week visitor arrivals were up by more than 1,900 percent. In 2021, new cases of Covid-19 were confirmed in Macau either just before that holiday period, or during it, coinciding with a sharp decline in visitor arrivals.

Visitor figures for the 2022 autumn Golden Week “exceeded” expectations, said the tourism bureau in a press release. The body added that the upward trend in visitor arrivals hinted at a “gradual restoration of travellers’ confidence in Macau” as a tourism destination.

According to figures provided by the city’s hotel industry and quoted by the tourism authority, the average occupancy rate of Macau hotels during the Golden Week holiday was 66.7 percent. The figure represented an increase of 28.1 percentage points over the daily average recorded across the whole of September this year.

China’s State Council designated October 1 to 7 inclusive for the holiday encompassing National Day on October 1. The week-long break is often referred to by the tourism trade as autumn “Golden Week”, and has traditionally been an important earnings season for Macau casinos and tourist facilities.

Before the holiday break, China’s National Health Commission had called on mainland residents to avoid long-distance travel during the festivities, to avoid the risk of spreading Covid-19.