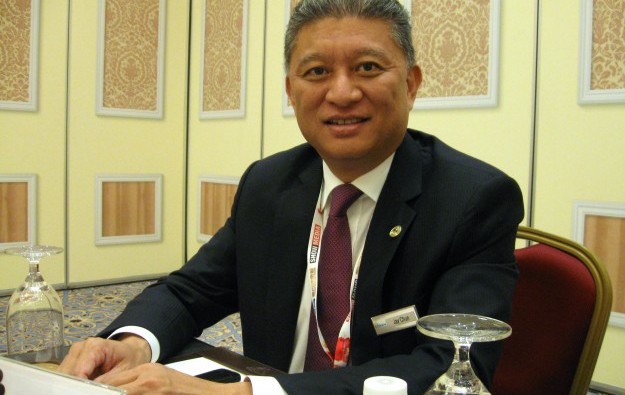 Macau will continue to be at the centre of the Asian casino industry for at least the next five years, said Jay Chun (pictured), chairman of gaming equipment maker Paradise Entertainment Ltd.

He made his remarks on Tuesday, the opening day of the Macao Gaming Show 2014 at the Venetian Macao in Macau.

Mr Chun is also chairman of the Macau Gaming Equipment Manufacturers Association, the main organiser of the show.

“In the next five years Macau will still be the centre of the Asia gaming. When you look at Cotai, there are so many [casino] sites going up. And people from the mainland like to make a trip to Hong Kong and then Macau and then back to China…” stated the entrepreneur.

“By the time 2016 comes and the bridge [linking Zhuhai, Hong Kong and Macau] is done, it will bring a lot more traffic [visitors] allowing them to come from Shenzhen or Hong Kong on a daily visit,” he said.

“That will be another revenue driver, because Shenzhen is about 10 times bigger than Zhuhai, and the income in Shenzhen is about 50 percent more than the average in Zhuhai. This will be significant in driving the growth of Macau,” added Mr Chun.

He said the biggest challenge to getting existing visitors to stay for one or even two nights was the expense of local hotels.

He stated: “Macau doesn’t have enough hotels and they are very expensive… For the near future if Macau adds more hotels it would bring more visitors here. They would stay one or maybe two nights, for sure that would be of help to the revenues for gaming, or any kind of revenues.”

Asked about his predictions for the Macau gaming market in 2015, Mr Chun said: “My personal view is that the VIP sector will still be a little bit slow, but the mass market will be stable. Since our main customers [in Macau] are from the mainland, it really depends on China’s economy and growth.”

He didn’t make specific reference to the corruption crackdown in mainland China.

Paradise subsidiary LT Game Ltd has made a success of a previous niche category – electronic table games with a live dealer – known in the firm’s case as Live Multi-Game. Asked about the prospects for the company in 2015, Mr Chun said: “I think globally we will be looking for [to sell] 3,000 units – not just Macau but also Australia and the U.S.”

He added: “I think it will be about double this year. This year we have a little help from overseas [sales]. But next year more than 50 percent will be shipped overseas. For this year we are struggling for overseas licensing, but for next year we should be clear – especially in U.S. market.”

LT Game is already licensed as a gaming technology supplier in the U.S. states of Florida and Nevada.

A strategic marketing partnership announced in August for the U.S. and Canada with Nevada-based slot machine maker International Game Technology (IGT) that takes effect from January, will enable the firm to take advantage of IGT’s existing approval as a licensed supplier in multiple U.S. markets, said Mr Chun. That will simplify the approval of individual products, he added.

The electronic multi-game category has flourished as overheads including labour costs, have risen globally in casino markets. That’s specially the case in Macau, where there is a shortage of casino dealers and a cap on traditional live table numbers imposed by the Macau government.

Mr Chun said: “Everyone building in Cotai was talking about 400 tables [per resort]. If they can get tables, fine. If they cannot, the will buy slot machines or our machines.”

He added: “When they [operators] originally designed their casino floors, they were not expecting to fill them with our machines. In the future it [the casino] floor could be like in the U.S. – i.e., dominated by machines.”