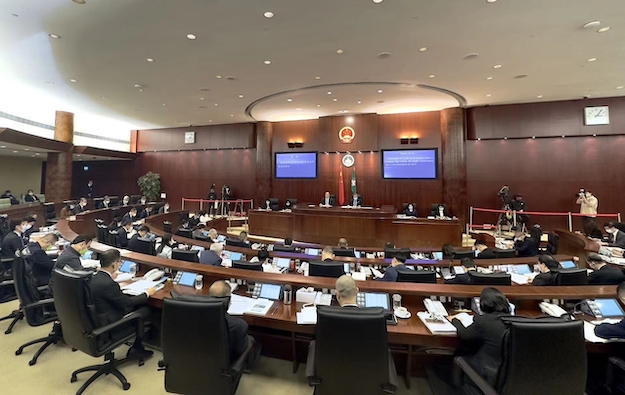 Macau’s Chief Executive, Ho Iat Seng, said on Tuesday there would be no immediate loosening of Covid-19 countermeasures, as the city will continue to follow mainland China’s strategy regarding epidemic-control goals.

“Macau has to follow China’s dynamic zero-Covid-19 policy,” stated Mr Ho, seen centre left, earlier in the day at the city’s Legislative Assembly. Visitors from a number of overseas markets would be “welcomed” to Macau, but “taking into account the epidemic situation, we must persist in the dynamic zero-case policy,” he added. The Chief Executive said however that he expected the situation to improve next year.

His remarks were made during a press conference following the reading earlier in the day, at the Legislative Assembly, of the local government’s policy address for 2023.

At the media briefing, Mr Ho said he could not comment on the ongoing public tender for fresh gaming rights. Macau’s six incumbent casino concessionaires and a newcomer, GMM Ltd – the latter a unit of Genting Malaysia Bhd – are now each in the process of bidding for one of up to six, 10-year new concessions.

In his address at the Legislative Assembly Mr Ho had said the city’s gaming sector would be directed “towards promoting, in a more pragmatic way, the synergistic development between gaming and non-gaming industries”.

He stressed that the new gaming concessionaires would be “strictly supervised” to ensure they “fulfil the commitments” set out in the future concession contracts, which must prioritise “non-gaming related projects” and attract more visitors from overseas markets.

Holders of new Macau gaming rights are expected to invest an aggregate of about MOP100 billion (US$12.4 billion) during the 10-year licence term, reported recently the Portuguese-language service of the city’s public broadcaster, TDM.

Negotiations with the Macau government are almost complete, the broadcaster said, with the bidders having reached agreement about what each of them propose to invest.

JP Morgan Securities (Asia Pacific) Ltd said in a Monday note that “the reported investment commitment of US$1.9 billion to US$2.5 billion per operator” was “very reasonable”.

Credit Suisse AG had said in an October note that a new generation of Macau casino concessionaires might each have to spend between HKD10 billion (US$1.27 billion) and HKD20 billion across 10 years, on non-gaming activities pledged in return for gaming rights issued by the local government.

On Tuesday, Macau’s Chief Executive said he expected the city’s economic structure to gradually change, with more non-gaming projects driven by “investment plans” from the new gaming concessionaires, namely in the areas of conventions and exhibitions, entertainment and shows, sporting events, culture and art events, and healthcare, among others. He said he expected non-gaming industries to account for 60 percent of Macau’s gross domestic product in the future.

Mr Ho said additionally that the Macau government would “ensure the stability of employment” in the city’s gaming sector after the granting of new casino concessions. The authorities would also make sure that the share of locals working in middle- and upper-level management positions in the city’s casino industry remained at “not less than 85 percent,” he added.

The decision by the Macau government to grant fresh 10-year licences to each of the city’s six incumbent casino operators has been welcome by top management at those firms. Each of the concessions... END_OF_DOCUMENT_TOKEN_TO_BE_REPLACED