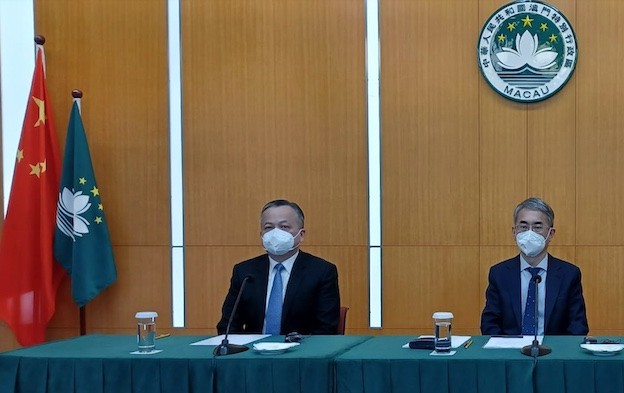 Macau is to create distinct zones on its casino floors and designated gambling chips that will be solely for the use of players from overseas. The moves will be part of a new gaming tax system to come into effect from January 1, whereby casino operators could be exempted – at the Chief Executive’s discretion – up to 5 percentage points of the 40 percent government levy on gross gaming revenue (GGR).

Such exemption will only be applicable to GGR generated by foreigner patrons, namely people from outside either mainland China, Macau, Hong Kong, or Taiwan.

The news was given on Friday by Adriano Marques Ho (pictured, left), director of the city’s casino regulator, the Gaming Inspection and Coordination Bureau, also known as DICJ. He was speaking at a media briefing organised by the city’s Executive Council, an advisory body to the government.

The gathering was to give some more detail about relevant administrative regulations required to put Macau’s foreign-player incentive policy into practice.

Mr Ho noted the idea behind the special gaming chips solely for the use of foreign players was so the government could “calculate the gross gaming revenue generated” from those specific patrons.

He did not, however, go into details on what would be the threshold that would eventually trigger any tax rebates on GGR generated by foreign patrons.

But Mr Ho noted: “For the foreigner patrons that gamble in the casinos here, they will have special zones set up for their play. As they are foreigner-passport holders, the Gaming Inspection and Coordination Bureau will have guidelines for casino concessionaires on what is considered a foreigner patron that is admissible to these special gambling zones.”

Andre Cheong Weng Chon (pictured, right), Secretary for Administration and Justice, said at the briefing that Macau had previously been “overreliant” on “local and mainland Chinese patrons”. The planned tax incentive to operators to attract overseas players – which he referred to as a “waiving scheme” – was designed to mitigate the costs that would be incurred by Macau’s operators, to bring in such players.

Boosting the volume of foreign visitors is also one of the key requirements for Macau’s six new casino concessionaires to fulfill as part of their investment pledge, Mr Cheong stressed.

“The cost for attracting them to come here is high,” Mr Cheong told the meeting. It might require operators “setting up overseas [promotion] offices, private jet services for certain high-end customers, and other supporting hotel services for them”.

He stressed that it would not be compulsory for foreign players to gamble in casino-floor areas reserved for them. They would be able to play in any part of a local casino.

DICJ boss Mr Ho said that in the pre-pandemic trading year of 2019, Macau recorded “3.58 percent” of its MOP292.46 billion (US$36.5 billion) annual GGR as being generated by foreign patrons.

The calculation for foreigner play was based on recorded transactions of MOP500,000 and above. That figure is the threshold for player identity to be recorded, under Macau’s anti-money laundering rules.

He added that “not many” such players “will likely want to restrict themselves to ‘foreigner-only zones’ – which we assume will only feature a small number of tables – as gamblers typically prefer to move between different tables to find the ‘pattern’ and ‘luck’ they favour.” That was a reference to behaviour often attributed in particular to Asian players of baccarat.

Some Macau casinos visited by GGRAsia on Thursday, actually had tables that were closed, notwithstanding strong consumer demand during Chinese New Year (CNY). The reasons for some tables being... END_OF_DOCUMENT_TOKEN_TO_BE_REPLACED