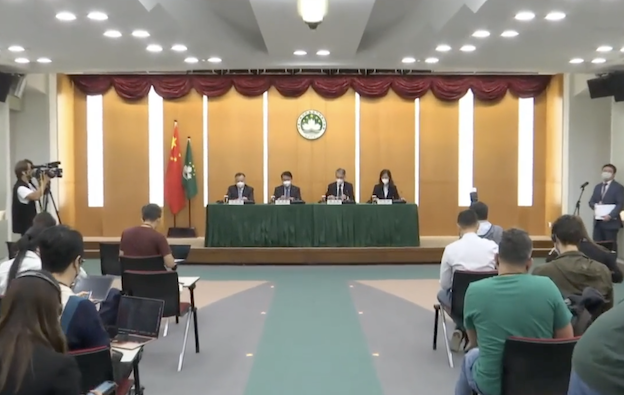 A proposal by a Macau-registered entity linked to Genting Malaysia Bhd, GMM Ltd, was not among the preferred bids, stated the commission in a press briefing (pictured).

An executive order awarding the “provisional licences” and signed by the city’s Chief Executive, Ho Iat Seng, was published in Macau’s Official Gazette on Saturday.

During Saturday’s press conference, the Macau government – represented by the city’s Secretary for Administration and Justice André Cheong Weng Chon; the Secretary for Economy and Finance Lei Wai Nong; and the Secretary for Social Affairs and Culture, Elsie Ao Ieong U – reiterated it hopes the new concessions can begin in January.

Galaxy Entertainment’s proposal was ranked second, followed by Sands China, Melco Resorts and Wynn Macau. Mr Cheong did not disclose the actual score given to each proposal.

Credit Suisse AG had said in an October note that a new generation of Macau casino concessionaires might each have to spend between HKD10 billion (US$1.27 billion) and HKD20 billion across 10 years.

In a press release also issued on Saturday, the Macau government stated that each of the six firms granted a “provisional” licence met the requirements set by the local authorities regarding “safeguarding” the employment of Macau ID holders, presenting plans to expand the source markets to “customers from foreign countries”, and for developing projects related to non-gaming activities.

Mr Cheong admitted that non-gaming activities proposed by the bidders had received the highest weighting in the evaluation of the tender proposals. He did not provide an actual percentage for the weight of each criterion.

Asked if Genting could still partner with any of the six companies granted a casino licence, Mr Cheong declined to answer, stating that was an “hypothetical” question. He added that any potential partnership would need to comply with the relevant legislation in Macau.

He stated that the Macau government expected a “smooth” transition between the expiry of the existing licences and the implementation of the new ones. Mr Cheong said the related legal proceedings for granting the new licences should all be completed in December.

Genting Malaysia has a casino monopoly in its home market via the Resorts World Genting complex, and also runs casinos in the United States, the Bahamas, the United Kingdom and Egypt. The Genting group also operates a casino resort in Singapore, via Genting Singapore Ltd.

Macau is one of the major gaming jurisdictions where the Genting companies do not have a presence. The group had also made a submission in the Macau concession tender that took place at the turn of the current century, but was not selected.

Investment analysts and industry observers had previously stated that they did not expect the Genting group to displace a current veteran of the Macau market in the ongoing public tender process.

Following the opening of the proposals in mid-September and a few rounds of negotiation, Macau tender bidders were told to up their spending proposals, specifically related to non-gaming investment.

International casino operator Las Vegas Sands Corp has been ranked as the most sustainable firm in the global casino sector, according to the 2023 edition of the S&P Global Sustainability... END_OF_DOCUMENT_TOKEN_TO_BE_REPLACED