Macau welcomes 30,000-plus visitors for third day in a row 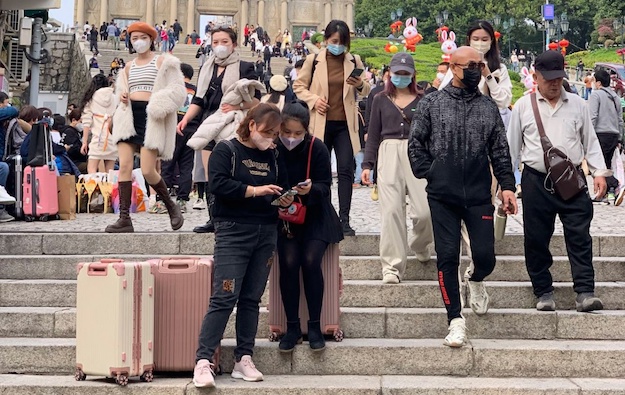 The average daily number of visitor arrivals to Macau on the first three days after the city cancelled most of its travel restrictions related to the Covid-19 pandemic stood at about 36,500. according to data released on Wednesday by Macau’s Public Security Police. The cancelled controls included dropping all testing requirements for inbound travellers from mainland China, Hong Kong and Taiwan.

In the period running from Sunday (January 8) to Tuesday (January 10), Macau recorded a total of 109,386 visitor arrivals.

Figures from the police showed that on Tuesday (January 10) the city welcomed 34,264 visitors. About 18,200 of Tuesday’s visitors entered Macau via the Border Gate land crossing with neighbouring Zhuhai, Guangdong province.

The authorities on the Chinese mainland also substantially eased from Sunday, travel restrictions with Hong Kong and Macau, with most Covid-19 controls scrapped.

The latest visitor arrival data mark a jump of more than 270 percent compared to December’s figures. According to figures previously disclosed by the city’s tourism bureau, the daily average for last month stood at just 12,630.

As part of a campaign to boost tourism into Macau, inbound travellers from Hong Kong that stay at least one night in Macau can enjoy a free journey back to Hong Kong via either bus or ferry. The promotion applies for any one visit made during the period January 13 to March 31 inclusive, and is sponsored by the Macau government.

Some Macau casinos visited by GGRAsia on Thursday, actually had tables that were closed, notwithstanding strong consumer demand during Chinese New Year (CNY). The reasons for some tables being... END_OF_DOCUMENT_TOKEN_TO_BE_REPLACED