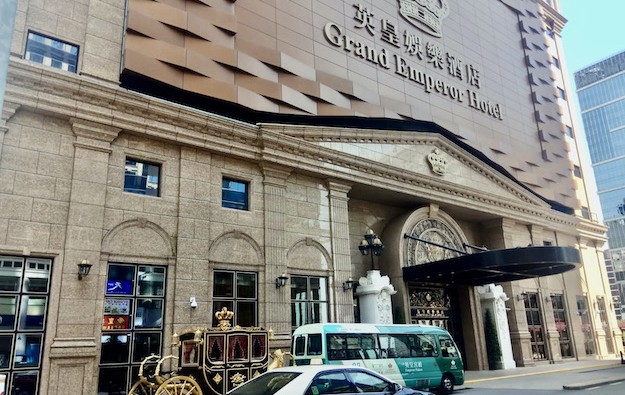 Macau’s Grand Emperor Hotel (pictured), a three-star hotel with gaming facilities, has seen its two-week lockdown lifted at the stroke of midnight on Tuesday (October 19).

The Grand Emperor Hotel issued a statement that the property’s “regular business” resumed on Tuesday, with its food and drink operations back in business starting from Wednesday. The property’s gaming floors, however, were not yet back in service as of Tuesday, as those areas were still being disinfected, a receptionist told GGRAsia.

The Grand Emperor Hotel is situated on Macau peninsula, and houses a so-called satellite gaming venue that relies on the licence of SJM Holdings Ltd.

One of the Covid-19 infected people identified in early October – a non-resident worker from mainland China – was found to have stayed at the Grand Emperor Hotel, on September 28 and September 29, and again on October 1 until the morning of October 4. Following the confirmation of his infection, the Grand Emperor Hotel was placed in a lockdown by the local authorities from the afternoon of October 4. It prevented anyone inside the property from leaving.

“Macau’s Health Bureau has confirmed that…the hotel is not the source of the [Covid-19] virus spread,” stated the Grand Emperor Hotel in its Chinese-language official announcement regarding the property’s reopening.

During the fortnight of the Grand Emperor Hotel’s lockdown, several rounds of nucleic acid testing had been conducted amongst all the people – guests and staff – kept inside. Those test results all were ‘negative’ for the presence of Covid-19, the hotel’s announcement also stated.

The man that was the cause of the Grand Emperor Hotel lockdown had  also visited another gaming property, Casino Oceanus – a venue without a hotel – prior to the local health authority’s confirmation of his Covid-19 infection.

That gaming venue, a self-promoted casino of SJM Holdings, had subsequently undergone a four-day closure, during which disinfection work and health authority checks were made, prior to the property’s reopening on October 9.

China has moved one step closer towards reopening, by relaxing some its Covid-19 control measures, with most infected people now able to quarantine at home rather than in state-sanctioned... END_OF_DOCUMENT_TOKEN_TO_BE_REPLACED