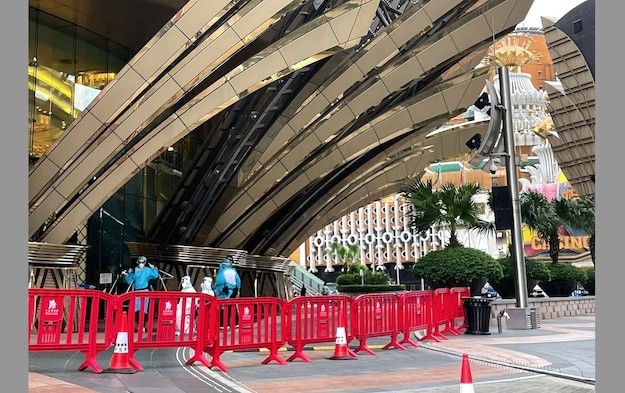 Public entrances at the Grand Lisboa casino resort on Macau peninsula were sealed, and the front of the property cordoned off with a plastic barrier (pictured), as of Tuesday afternoon. People in biohazard suits could be seen in front of the SJM Holdings Ltd property.

The development coincided with news at the 5pm press conference of the city’s Novel Coronavirus Response and Coordination Centre that what was termed a “cluster” of 13 Covid-19 cases had been identified among people associated with the property.

The property was later on Tuesday added to the ‘red’ Covid-19 zones in Macau, which lists buildings that have been locked down. A statement from the city’s health authorities said the property could only reopen on July 11 at the earliest, once it had been downgraded to ‘yellow’ status. The latter categorisation could only be removed by July 13, it added.

In a statement issued late on Tuesday regarding the closure of the Grand Lisboa property, SJM affirmed its “commitment to proactively implement” countermeasures against the pandemic, “in strict accordance with the guidelines as stipulated” by the Macau government.

“SJM has always, and will continue, to maintain close communication with the Health Bureau and the Gaming Inspection and Coordination Bureau, to support the authorities’ pandemic control measures, and holding the health and safety of its employees and of all visitors as top priority,” it added.

The gaming bureau said in a statement emailed to GGRAsia on Wednesday, in response to our prior enquiry: “In order to cooperate with the health authorities’ epidemic prevention and control measures, the Grand Lisboa Casino located in the Grand Lisboa Hotel [temporarily] ceased operations at 5.30pm yesterday [Tuesday].”

Macau’s tally of infections in the current outbreak – the first since October, and which began on June 19 – had reached 941 by midnight on Monday, with 89 new cases in 24 hours.

On Monday, the Health Bureau confirmed that outlets at the Shoppes at Four Seasons, a mall in one of casino operator Sands China Ltd’s Cotai properties, had been shut temporarily from that day, amid an alert over “at least” 40 Covid-19 infections identified among some workers associated with the site.

The imminent return of package tours from mainland China will not only help boost Macau’s tourism businesses, but is also expected to help casinos gain more foot traffic in their mass gaming... END_OF_DOCUMENT_TOKEN_TO_BE_REPLACED