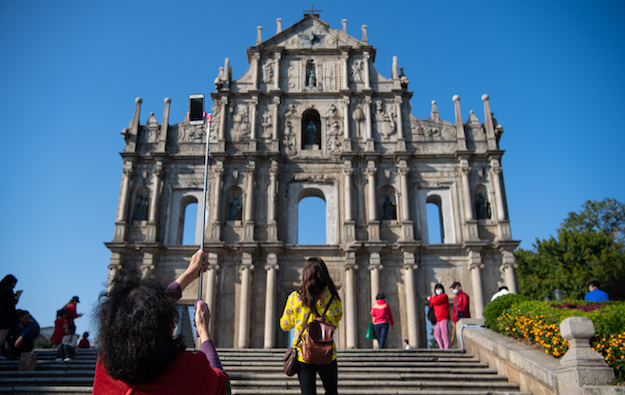 It could be at least two weeks before Macau’s tourism workforce rebounds from the wave of Covid-19 infection currently hitting the local labour market, and it might only be for the Chinese New Year (CNY) break – starting on January 21 – that Macau sees significant volumes of mainland tourists, and the return of meaningful numbers of Hong Kong tourists, say two trade representatives in comments to GGRAsia.

“I would expect to see the first batch of returning mainland China tourists to visit Hong Kong and Macau during the upcoming Chinese New Year break, plus some Hong Kong visitors that are coming back here,” said Wong Fai, president of the Macau Leisure Tourism Services Innovation Association.

Macau Travel Industry Council president, Andy Wu Keng Kuong, told GGRAsia that Macau would need around “one to two weeks” for the current Covid-19 wave to subside, and the hospitality sector workforce to recover.

The December 20 to 27 visitor figures released by Macau’s Public Security Police, showed no significant uptick in traffic, notwithstanding an easing of Covid-19 rules, including the dropping of even home quarantine for those inbound.

Mr Wong told GGRAsia: “While we [Macau] have scrapped quarantine requirement for visitors from Hong Kong since December 23, transport options have yet to catch up. On the other hand, Macau is grappling with a widespread Covid-19 wave that also affects the hotel sector’s human resources: many properties have now limited their services because they are short-handed.”

Mr Wu noted ferry services between Hong Kong and Macau – mostly suspended for more than two years during the pandemic – might “resume gradually after the start of 2023″.

China’s State Council has designated January 21 to 27 inclusive as the Chinese New Year break for 2023. For Hong Kong, the public holiday for the festive period covers January 23 to January 25 inclusive.

In pre-pandemic trading, many mainland tourists combined stops in Hong Kong and Macau in a single holiday. During the crisis, Macau had retained a quarantine-free travel arrangement with the mainland, but no such arrangement had been facilitated between the mainland and Hong Kong.

The prospect of two-centre holidays has returned, after China’s National Immigration Administration said on Tuesday it would soon start accepting applications for mainlanders to visit Hong Kong.

The processing of mainland China’s outbound tourism permits for overseas destinations was “usually more complicated and time consuming for its residents, compared to the travel permits for coming to Macau and Hong Kong,” Mr Wu told GGRAsia.

“In that respect, it is actually an advantage for Macau,” that should help the city “attract more inbound tourists from mainland China during the Chinese New Year break,” he added.

International casino operator Las Vegas Sands Corp has been ranked as the most sustainable firm in the global casino sector, according to the 2023 edition of the S&P Global Sustainability... END_OF_DOCUMENT_TOKEN_TO_BE_REPLACED