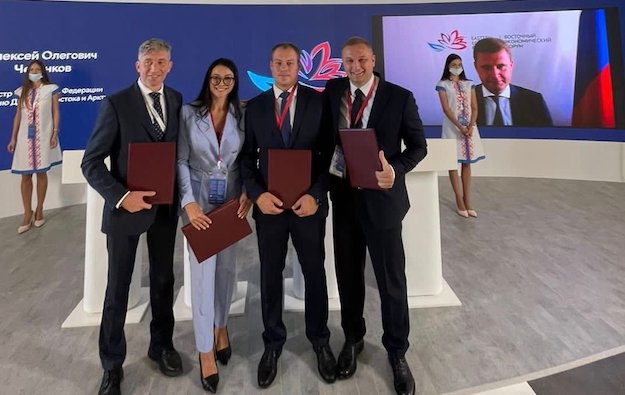 A company called Mantera Group signed on Thursday an agreement (ceremony pictured) to spend RUB14 billion (US$192 million) on a casino resort in Primorye’s Integrated Entertainment Zone (IEZ) near Vladivostok in the Russian Far East. That is according to a press release on the website of the Primorsky Krai Development Corp, the agency overseeing the zone.

Mantera plans to complete the scheme within four years of work starting, which is scheduled to be in 2022, said the release.

Another announcement on the agency’s website said that Hong Kong-listed casino group NagaCorp Ltd had restarted its construction work on a casino resort in Primorye, after completing in August a deal with a Russian contractor.

“The contractor plans to carry out construction in the winter. The next stage of work will be completed next year,” Igor Trofimov, executive director of the Primorsky Krai Development Corp was cited as saying in the latter announcement.

To date, the total amount invested in “Naga Vladivostok” exceeds RUB6.2 billion out of the RUB11 billion planned as part of the construction of the first phase, stated the agency.

The Shambala casino resort – the second to launch in Primorye – received on average 550 guests per day during its first 2.5 months of operations, according to a business update issued in June.

The business update covered the period since the property’s launch on October 16, 2020, up to the end of that year.

Some Macau casinos visited by GGRAsia on Thursday, actually had tables that were closed, notwithstanding strong consumer demand during Chinese New Year (CNY). The reasons for some tables being... END_OF_DOCUMENT_TOKEN_TO_BE_REPLACED