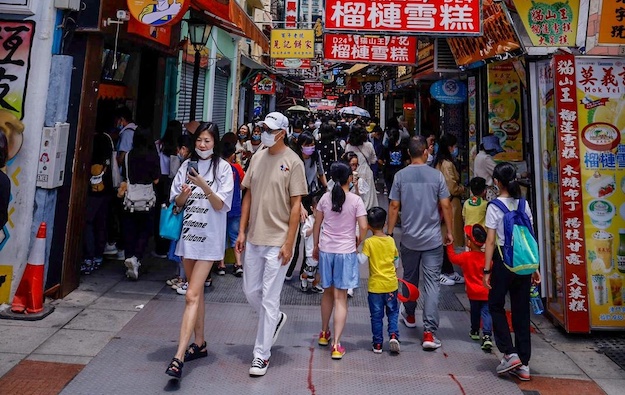 Macau had 165,500 visitor arrivals for the five-day holiday surrounding Labour Day on May 1, meaning there was a daily average of 33,100. But the actual tally for the final two days on May 4 and May 5 was fewer than 30,000 arrivals, according to figures from Macau’s Public Security Police.

The tally was not directly comparable with the 2019 holiday, which saw 531,000 visitor arrivals, as that year’s break was officially only four days for mainland China residents.

For 2021, China’s State Council designated the first five days of May as the Labour Day break. Mainland China currently has a quarantine-free travel bubble with Macau, and is presently the main source of Macau’s tourists.

Macau’s tourist arrival tally on May 1 – a Saturday – at the start of the Labour Day break, stood at more than 44,000. That was the best daily performance since the beginning of the pandemic.

But the daily aggregate subsequently dwindled to approximately 36,000 on May 2, and 34,000 on May 3, reported the Chinese-language radio service of the city’s public broadcaster TDM, earlier this week citing, the police’s statistics.

The 2019 holiday was officially only four days: May 1 to May 4 that year, as designated by China’s State Council. Nonetheless, May 4 that year was a Saturday, meaning some visitors might have extended their break to include the Sunday.

The estimated daily GGR for this year’s Labour Day break was “MOP400 million [US$50 million] to MOP500 million”, as compared to “over MOP1 billion a day” during the May Day break in 2019, suggested JP Morgan analysts DS Kim, Derek Choi and Livy Lyu in the Thursday memo.

“This is 50 percent to 80 percent higher than the recent run-rates – MOP270 million to MOP280 million a day in March/April – well above the 30 percent to 50 percent uptick that we typically see for May Golden Week, reflecting pent-up demand,” the JP Morgan analysts suggested.

They forecast Macau could generate more than MOP9.5 billion in GGR for the whole of May.

In 2019, Macau had more than 531,000 visitor arrivals for May 1 to May 3. A majority of those arrivals came from mainland China, according to information released from Macao Government Tourism Office (MGTO) at the time.

Some Macau casinos visited by GGRAsia on Thursday, actually had tables that were closed, notwithstanding strong consumer demand during Chinese New Year (CNY). The reasons for some tables being... END_OF_DOCUMENT_TOKEN_TO_BE_REPLACED