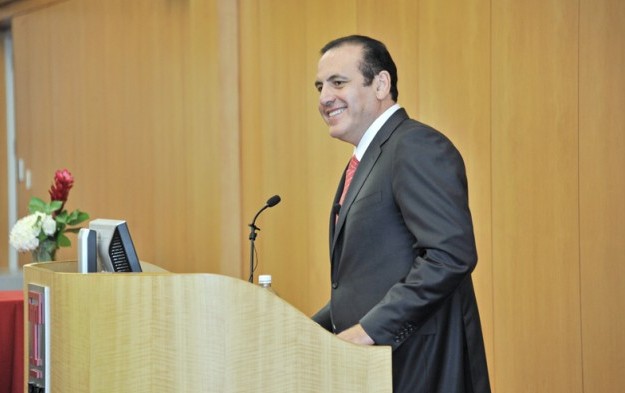 There’s a new breed of weighty casino gamblers that might be justifiably referred to as ‘PIPs’ – or pretty important persons. These are the premium mass players that might not qualify for credit, but do spend enough to qualify for perks such as complimentary rooms.

Gamal Aziz, president of Wynn Macau Ltd, told GGRAsia on the sidelines of the opening session of Global Gaming Expo (G2E) Asia 2014 that such players were now being courted more assiduously by his company.

“As far as the premium mass is concerned, our orientation from a marketing standpoint has shifted to where we’re not offering [player] discounts, but we are accommodating some of these customers that are generating some of the highest profit. We’re giving them rooms where maybe in the past we didn’t.”

Asked if the trend in Macau was to manage mass floors by minimum bet rather than by volume at lower price points, Mr Aziz told us: “It’s not really that we’re only pushing the minimum bets up. On any given night you can find a HK$300 [US$39] table. It’s really about maximising the potential of those top 20 percent [players] that generate 80 percent of your profit.”

Recent polling of visitors to Macau by the Institute of Tourism Studies (IFT) in Macau suggest that around 32 percent of visitors are providing most of the gambling revenue.

Galaxy Entertainment Group Ltd reported today that its gaming revenue was up 33 percent year-on-year and seven percent sequentially in the first quarter of 2014. Galaxy didn’t give a breakdown on the numbers, but it’s likely that premium mass will have made a significant contribution.

The IFT’s first quarter 2014 survey hasn’t yet been published. But in the Q1 2013 survey, only 32 percent of the self-identified gamblers indicated they had a budget of more than MOP5,000 (US$626) for casino gambling per trip.

The IFT survey results suggest that roughly 68 percent of those gambling on Macau mass floors can’t afford – per trip – more than 17 hands of live baccarat at HK$300 per minimum bet, meaning that nearly seven out of ten visitors have a very short shelf life per trip as players of traditional table casino games.

But Mr Aziz told GGRAsia his company wasn’t interested in ‘piling them high and selling cheap’.

Mr Aziz reunited with his mentor Steve Wynn in January last year to drive the development after the firm’s new Cotai pr0ject Wynn Palace, after spending around 12 years at MGM’s Hospitality Division.

The imminent return of package tours from mainland China will not only help boost Macau’s tourism businesses, but is also expected to help casinos gain more foot traffic in their mass gaming... END_OF_DOCUMENT_TOKEN_TO_BE_REPLACED