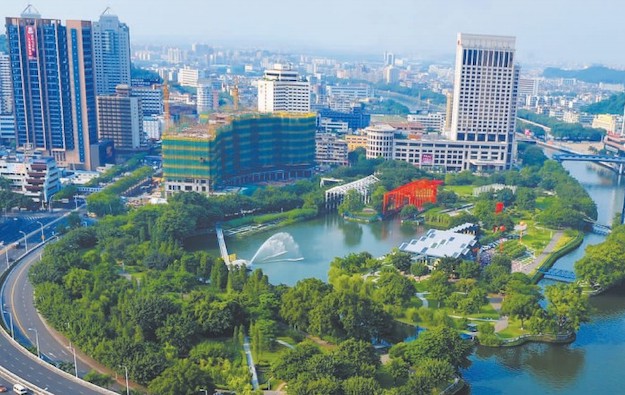 Hong Kong-listed Melco International Development Ltd says it is to develop – as part of a joint venture – a non-gaming complex including a theme park in Zhongshan (pictured), a city near Macau, in Guangdong province, mainland China. Melco International, controlled by entrepreneur Lawrence Ho Yau Lung, is the parent of casino operator Melco Resorts and Entertainment Ltd, a licensee in Macau.

The project will be carried out by an entity called Melco Yachuang Real Estate Development Co Ltd, and the Melco group will be responsible for developing the theme park within the overall project.

The land plot in Zhongshan covers an area of approximately 504,000 square metres (5.43 million sq feet), and includes various plots with land-use authorisations ranging from 40 years to 70 years, depending on specific utilisation, according to a separate filing to the Hong Kong bourse.

The aggregate consideration for the land-use rights was approximately CNY4 billion (US$617.3 million), inclusive of deed tax and interest.

In the press release, Melco International said the site is located in “the heart of Zhongshan,” and was “well connected to nearby cities including Macau, Zhuhai, Guangzhou, Shenzhen, and Hong Kong.”

According to the Melco International announcement, the Zhongshan project will include “residential complexes, office areas, hotels, serviced apartments, wellness centres, shopping malls, and a theme park.”

Melco International said it expects the majority of the scheme, including the theme park, to be completed by 2025.

Under the joint venture agreement, the Melco side will contribute CNY150 million towards the acquisition of the land; and CNY250 million for the development of the project. Melco International will also fund the construction costs and pre-opening expenses of the theme park, which are budgeted at over CNY1.45 billion; as well as fund the ongoing operational costs of that venue.

A Melco International subsidiary will be “solely entitled” to all profits or losses arising from its ownership and operation of the theme park, stated the filing.

Wednesday’s announcement quoted Melco International’s chief executive Mr Ho as saying: “We are determined to play an active role in the development of the Greater Bay Area, and to leverage the incredible expertise of the group in non-gaming activities.”

A recent research paper from two Macau gaming law experts said the Macau government might seek forms of in-kind benefit other than licence fees and taxation from Macau casino companies that wish to take part in a new public tender process associated with the 2022 expiry of the six current gaming licences in the city. This might include, said the paper’s authors, proposals for investment in the Greater Bay Area.

Spectrum Gaming Group LLC, a specialist consultancy on probity and legal compliance in the regulated casino sector, has issued its “Top Ten Trends To Watch for 2023”, including likely events in... END_OF_DOCUMENT_TOKEN_TO_BE_REPLACED