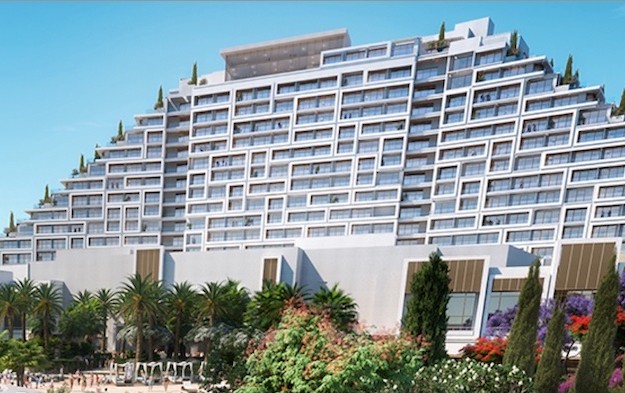 Hotel room bookings for the under-development City of Dreams Mediterranean casino resort (pictured in an artist’s rendering) in Cyprus can now be made for stays commencing June 1, 2023 onward, according to a check by GGRAsia of the property’s official online booking platform.

City of Dreams Mediterranean is being constructed and promoted by Melco Resorts and Entertainment Ltd and is located in Limassol on the south coast of Cyprus. The company has a monopoly casino gaming licence for the European holiday destination via a venture involving local partners.

As of Wednesday, the lowest nightly cost for a room on June 1, 2023 – a Thursday – is EUR317 (US$311.60) for accommodation with a king-size bed, according to the booking site. Room rates for several types of suite are also quoted, at higher cost.

A promotional campaign offering discount rates – for stays between June 1, 2023 and September 30, 2023 – has been launched, a Cypriot news outlet, To Thema Online, reported last week. The campaign is running until December 31 this year, the news platform stated.

City of Dreams Mediterranean was likely to launch in “early second quarter 2023”, though the timetable was “subject to regulatory approvals”, said Melco Resorts’ chairman and chief executive, Lawrence Ho Yau Lung, in the group’s second-quarter earnings conference call in August.

On Tuesday this week, a job fair was held in Limassol offering more than 1,000 positions open to applicants from across the Republic of Cyprus.