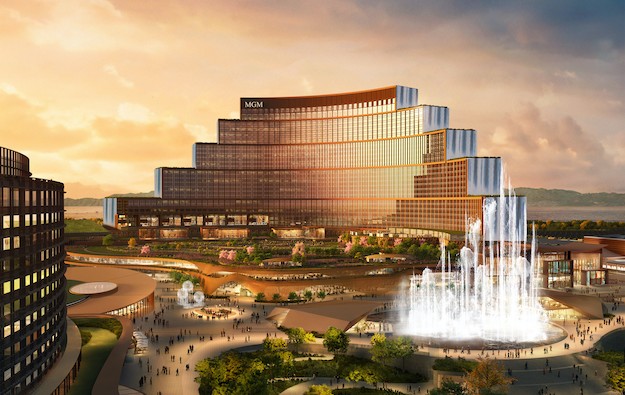 Casino operator MGM Resorts International’s equity contribution to a prospective integrated resort (IR) in Osaka, in Japan, could be between US$2 billion and US$2.5 billion, suggests S&P Global Ratings Inc. Osaka has teamed with MGM Resorts and Japan’s Orix Corp as its private-sector partners for a tilt at a casino resort.

The rating agency’s calculations are “based on the estimated US$10 billion development cost” for a casino resort in Osaka. The estimate also assumes “MGM’s expectation that the project could be funded at 55 percent debt to equity,” stated the institution in a recent report.

“MGM believes its equity contribution could be spread over several years, perhaps 2024 to 2026,” it added.

The resort complex (pictured in an artist’s rendering) would – according to previous statements – require an initial investment of JPY1.08 trillion (US$8.38 billion, at current exchange rates), with a target date of 2029 for opening it.

“Based on the current timeline and the likelihood that Japan will not issue a licence until 2023, we do not expect material spending to begin before late 2023 or 2024,” said S&P.

A national MP for Osaka who heads the Japan Innovation Party said in recent commentary that he believes that Osaka’s IR District Development Plan will get approval from the national government before the end of this month.

Osaka’s IR plan was submitted for scrutiny by the national authorities in late April last year, and a number of politicians has recently called on them to expedite the process.

S&P said a casino resort project in Osaka “will likely take several years to complete,” and if the MGM-Orix consortium was to be granted a licence, “MGM anticipates opening the resort in the second half of this decade”.

The ratings agency said it believed that MGM’s ownership in the consortium “will be no more than 50 percent”.

According to previously-disclosed information, MGM and Orix would each own 40 percent of the consortium, while local investors will own the remaining 20 percent. “However, if the consortium does not bring in additional investors, MGM’s and Orix’s ownership would each increase to 50 percent,” noted S&P.

“MGM’s sizable equity contribution represents a possible leveraging risk over the next few years as MGM will not receive any cash flow benefits from the project,” it added. “Nevertheless, if successful, the resort could broaden MGM’s geographic reach and scale and enhance its global brand reputation as an integrated resort developer.”

S&P affirmed the ‘B+’ issuer credit ratings on MGM Resorts, including that of MGM China. The agency also removed the group from its credit watch ‘negative’.

Some Macau casinos visited by GGRAsia on Thursday, actually had tables that were closed, notwithstanding strong consumer demand during Chinese New Year (CNY). The reasons for some tables being... END_OF_DOCUMENT_TOKEN_TO_BE_REPLACED