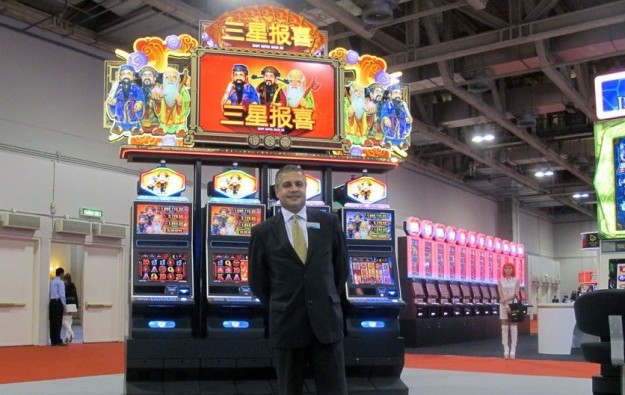 “The relationship is very tight at all levels,” Mr Gill told GGRAsia on the sidelines of the Macao Gaming Show. The trade show, taking place at casino resort Venetian Macao, ends on Thursday.

IGT and LT Game announced in August a three-year distribution agreement for North America and Macau. Under the terms of the agreement, IGT will distribute LT Game’s live and electronic table game systems in the U.S. and Canada, while LT Game will serve as distributor for IGT’s slot machines in the Macau market.

The two manufacturers have already teamed up to jointly exhibit at the Macao Gaming Show, in a 1,440 square metre (15,500 sq feet) booth, the show’s largest.

“This is the first show that we actually have been able to exhibit together since the [agreement] announcement,” Mr Gill said.

The IGT executive pointed out that both companies profit from the distribution deal. “We get the benefit of having somebody who is as well known as LT within the Macau market – very established, been around for a number of years, with great regulatory and operator relationships.”

He added: “LT benefits with the amount of sales coverage that we can offer them. North America is our home market, which is a market they are trying to penetrate.”

The partnership with LT Game is already allowing IGT to raise its Macau profile, said Mr Gill. “We tended to have some very good relationships in most of the U.S.-based organisations… LT Game plays in all types of operators, whether it is a tier one or tier two [operator]. So, it gives us a bigger penetration [into that market].”

He added: “Also, language and culture is always a key aspect. So building that relationship with a firm like LT, for us is a key milestone.”

The IGT executive said it is still too early for the deal with LT Game to translate into an increase in sales volume. “The thing we have seen is there are more orders coming through potentially on the horizon just because there are certain [smaller Macau] operators that we never penetrated before,” Mr Gill said.

He added that the new IGT “market-attuned” offering could play a role in increasing the company’s footprint in Macau. The slot machine maker is exhibiting several Asian-themed products at the Macao Gaming Show, including the “Azure Dragon” and “San Xing Bao Xi” progressive themes.

Some of the company’s Asian-themed products have already been approved under Macau’s latest technical standards for electronic gaming machines, which came into effect in July, Mr Gill pointed out.

He added: “This offering is really looking at the demographic, the math, the types of players and the character sets, and then building a proper game specifically for the local market, as opposed to just taking an existing game and localising it.”