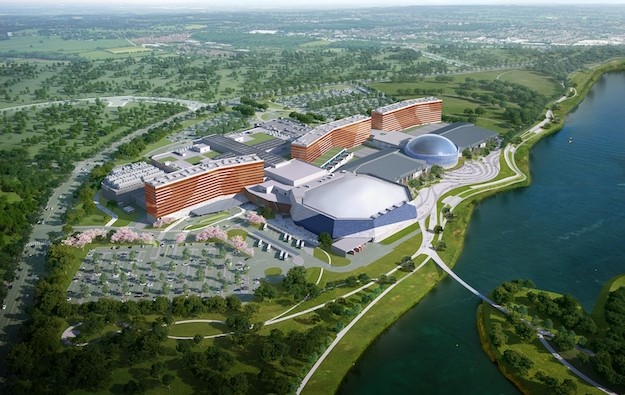 United States-based Mohegan Tribal Gaming Authority, an investor in a foreigner-only casino complex in South Korea, has given some more detail on a 15,000-seat arena for the property, noting it will be suitable for K-pop concerts, festivals, touring family shows, and major sports tournaments.

A local unit of Mohegan Tribal Gaming Authority, trading as Mohegan, mentioned in a Thursday press release the facility due at Mohegan Inspire Entertainment Resort. The latter (pictured in an artist’s rendering) is being developed at Yeongjong Island, Incheon, outside the South Korean capital, Seoul, and is due to open in the fourth quarter of 2023.

“Given the strong demand for K-pop and other live performances, [South] Korea’s performing art industry has long been facing a shortage of high-quality venues that can support shows of top-tier artists from home and abroad, and various cultural events,” said Ray Pineault, chief executive and president of Mohegan, as cited in the release.

The firm said it would apply its expertise in running arena shows, acquired via its Mohegan Sun property in Connecticut, in the U.S.

The South Korean venue’s arena would have a full-stage monitor and video wall lighting “to offer an optimal view from any seat”, along with a HD 4K live broadcasting system “to treat the audience to an enhanced immersive experience”. It would also hava a Meyer Sound Panther System “to elevate performance sound quality”.

A “core strength” of the arena would be a “highly-efficient stage system” enabling “standard-specification stages to be installed or dismantled within just two hours”, meaning entirely different concerts could be staged on consecutive days.

As well as a foreigner-only casino and an event arena, it is due to have three 5-star hotels, a large conference centre, an indoor water park, and an outdoor “family park”.

International casino operator Las Vegas Sands Corp has been ranked as the most sustainable firm in the global casino sector, according to the 2023 edition of the S&P Global Sustainability... END_OF_DOCUMENT_TOKEN_TO_BE_REPLACED