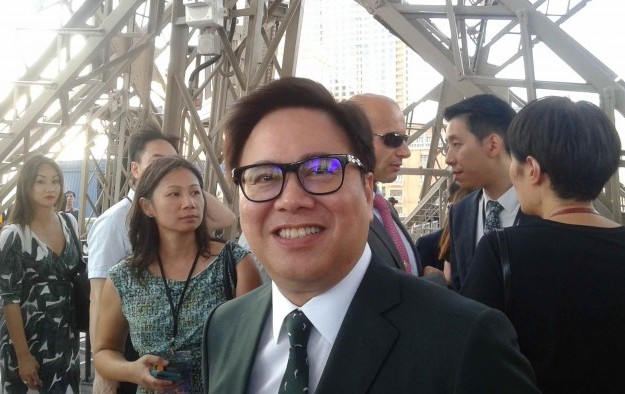 Wilfred Wong Ying Wai, president and chief operating officer of Sands China Ltd, said on Wednesday that he does not expect the planned introduction of new customer verification technology at local automated teller machines (ATMs) to have a negative impact on his firm’s gaming earnings.

“We have always supported the government initiative to improve the [city's] business environment. This initiative helps prevent some illicit ways used by some people to obtain cash via the use of several credit cards – and lend it to others; This is something that we also don’t like to see,” said Mr Wong (pictured in a file photo). He was speaking to reporters on the sidelines of a panel conference on the second day of the Global Gaming Expo (G2E) Asia trade show and conference.

Macau’s Secretary for Economy and Finance Lionel Leong Vai Tac said last week that the city’s casino earnings might be negatively affected by the new technology, as it might have some influence on visitor behaviour, particularly regarding their spending in casinos. He noted it might take some time for visitors to get used to the new measure.

Mr Wong however said he expects the impact of the new technology to be minimal to the city’s casino earnings.

“I don’t think this government initiative is going to affect us, because for the ATM machines here, there is already a set limit [on cash withdrawal per card],” said Mr Wong.

The Monetary Authority of Macao has set a limit of MOP5,000 (US$626) or HKD5,000 per transaction for withdrawals in the city’s ATMs using bank cards issued by mainland China banks, according to a rule in effect from December 9. At the time, the Monetary Authority also noted that the daily withdrawal limit with the use of such cards outside mainland China remains at CNY10,000 (US$1,449), or at an annual withdrawal limit of CNY100,000.

Asked about the firm’s plans in Macau following the opening of the Parisian Macao in September, Mr Wong said the company is mulling revamping or adding new facilities to its existing properties.

“Of course we are very interested in investing more in Macau. If there is, from the government side, available land, we would pay attention to that and try to take part [in such development],” said Mr Wong. “Regarding our existing properties, we’ll consider things such as a revamp or adding more things to them. This is in our planning,” he added.

“In terms of non-gaming, now what we have to do is to do well with our retail business, which is a big segment. Another thing is our food and beverage business, it also needs further enhancement. But we are still considering whether to add any new facilities,” the Sands China executive noted.

Mr Wong did not comment about any possible negative impact on hotel bookings at the Parisian Macao, following the finding of “abnormal levels” of legionella bacteria in 10 out of 78 water samples collected in April at the property.

The Sands China president described in his panel talk on Wednesday that the Parisian Macao has been an addition that creates a “cluster effect” within the portfolio of Sands China’s properties, which has contributed to boost business.

“From a practical viewpoint, it seems quite difficult” for Japan’s national authorities to be able to make a decision by the end of the calendar year, on respective proposals by Osaka... END_OF_DOCUMENT_TOKEN_TO_BE_REPLACED