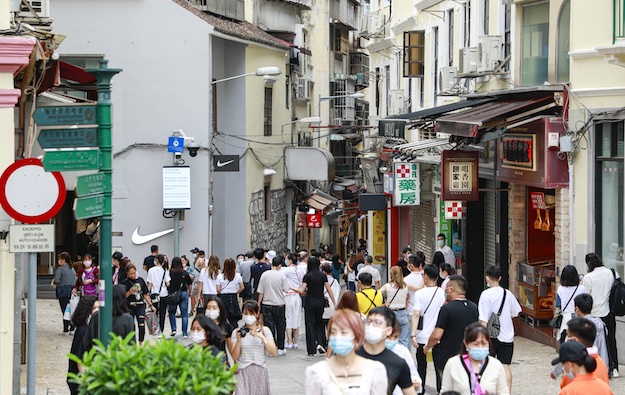 Newly-reported cases of Covid-19 infection in mainland China – including some in Guangdong province neighbouring Macau – are likely to cloud in the near-term, the enthusiasm of mainland residents to come to Macau as tourists, and might also delay steps to ease travel restrictions between the places, say several tourism industry figures.

But both believed that it was still too early to tell if the recently-reported Covid-19 cases in mainland China would affect Macau’s travel trade in the summer months of July and August.

Mainland China is the only place to have a largely quarantine-free travel bubble with Macau, amid existing travel restrictions as countermeasures against Covid-19. Guangdong province has been the largest source of Macau’s inbound mainland Chinese tourists in recent months, according to official data.

Nonetheless, in recent days, the number of mainland communities where residents would be subject to quarantine on arrival in Macau, has been growing.

“The rising number of [Covid-19] infections in Guangdong will for sure affect travel sentiment, and the number of incoming tourists for the near term,” remarked Mr Ma, deputy chairman and executive director at Hong Kong-listed Success Universe Group Ltd, an investor in Ponte 16.

Since mid-May, communities in, respectively, Anhui, Liaoning and Guangdong provinces have been added to Macau’s 14-day quarantine-on-arrival list.

Additionally, any inbound visitors that have been to the relevant communities within those mainland provinces in the two weeks prior to their arrival in Macau, are required to undergo a 14-day quarantine at designated venues.

Communities in the Guangdong cities of Guangzhou and Shenzhen were recently added to Macau’s quarantine-on-arrival list, according to updates made by Macau’s Covid-19 task force, the Novel Coronavirus Response and Coordination Centre.

Starting from 10pm on Monday (May 31), passengers leaving Guangzhou must present a negative nucleic acid test result taken within 72 hours, according to a notice issued by the provincial authorities on Sunday, quoted by state-owned newspaper Global Times.

In addition, parts of Guangzhou city’s Liwan district and some businesses were shut, while public transport links were suspended, reported the South China Morning Post on Saturday.

Success Universe’s Mr Ma believed that the coming “two to three weeks” would be the “key time” to watch if mainland China Covid-19 cases were curbed. “But as in past experience, I think the mainland China authorities do have the capacity to quickly keep the Covid-19 development under control,” Mr Ma told us.

The Ponte 16 boss added: “The summer break would still look positive for Macau, provided that the Covid-19 infection cases were all contained in the coming two to three weeks on the mainland.”

Mr Ma said he had expected the Macau market to see continuous recovery in mass-market gaming and resort-visit business in July and August, a peak time for families’ outbound travel.

Macau Travel Industry Council’s Mr Wu said that his group estimated the city would welcome a daily average of “30,000 to 40,000” tourists for July and August, assuming that Macau’s travel ties with Hong Kong had not yet resumed by then.

“With that assumption, we still think that Macau could achieve an average hotel occupancy of around 60 to 70 percent for the summer break [July and August], as the city’s travel trade would still be supported by mainland China tourists,” Mr Wu said.

But he admitted that the recent reports of Covid-19 infections in mainland China posed uncertainty on the timing of further easing of travel ties between the mainland and Macau. The mainland’s electronic application system for Individual Visit Scheme (IVS) exit visas is yet to be reinstated. Group travel visas – suspended last year – are also yet to be resumed.

“Despite a solid May Golden Week, near-term visitation headwinds remain, as an uptick in Covid[-19] cases in mainland China introduce risks to the recovery, while the 100th anniversary of the Chinese Communist Party on July 1 will also weigh on visitations,” CLSA’s analysts Jonathan Galligan, Katrina Chiu and Harry Chen wrote.

Despite these headwinds, the CLSA team said it believed gradual sequential recovery in Macau’s gaming sector would continue, “with an inflection occurring in the fourth quarter 2021 and into 2022”.

The CLSA team had a bearish outlook on Macau’s VIP gaming market, but saw the city’s “premium mass strength continuing”, a reference to players that gamble in high denominations, but in cash, rather than the credit-based rolling chips used by traditional VIPs.

Macau recorded 69,279 visitor arrivals on the sixth day of the Chinese New Year (CNY) holiday period, showed official data. The city welcomed about 384,600 visitors in the first six days of the... END_OF_DOCUMENT_TOKEN_TO_BE_REPLACED